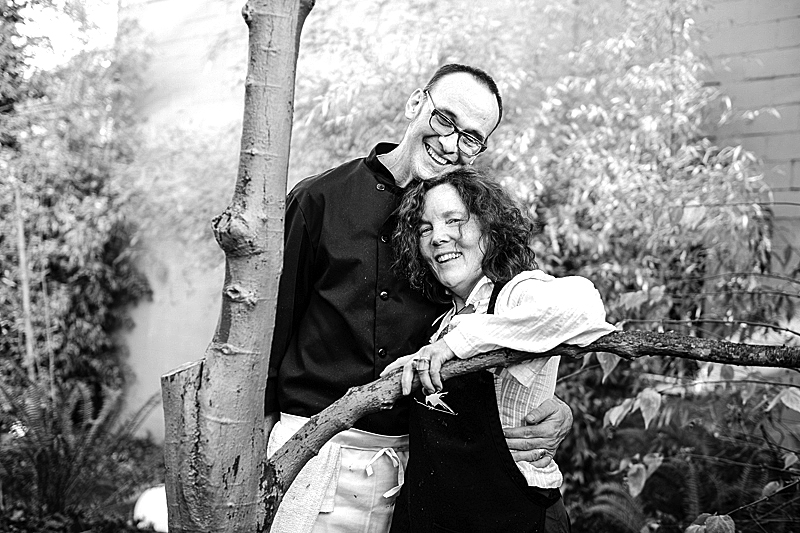 Well, I’ve hooked another COUPLE for Who’s Who… these profiles are so much fun to write because I get to learn about TWO people, instead of just one, who have established themselves in our community. And this couple certainly has left their mark… well, a hole actually…. A Donut Hole!

Lisa Boheme and her husband/partner Kevin Hernandez have become a sweet retreat at the Farmer’s Market lately, selling their Mortiscycle donuts. But before we get to that, let’s find out a bit more about each of them, shall we?

Lisa is originally from La Jolla, California and lived in Victoria, BC for 28 years where she had a coffee house called La Boheme. She has two daughters, Emma May who is a NSCAD graduate and Ursula, a contemporary dancer in Winnipeg.  Lisa is self-taught in the restaurant business and for the past 10 years, she owned a small but thriving restaurant in Victoria called The Superior. With 75 seats inside and 40 seats outside, the cafe had a seasonal menu, all local and organic tapas menu and showcased the talents of a wonderful chef named Torin Egan, who is now opening his own restaurant in BC. But Lisa’s Superior restaurant was unique in its operation, as she says, “We participated in local fundraisers, film noir evenings, and theatrically themed New Years Eve and Valentines Day parties, burlesque supper club evenings and guest chef nights. The décor of the main room changed with the seasons, therefore regular customers got to see a new room and new menu with every season. As a compelled, creative person and using a bit of my daughter’s wise words…’we are what we see,’ I used the restaurant as a foundation to create “stages” for our guests and therefore use my energy to create interiors designed as thought provoking.”

Kevin Hernandez originates from Los Angeles and lived in the Pacific Northwest until three years ago. He is a graduate of the Pacific Culinary School in Portland, in Pastry arts. In addition to his pastry arts and due to his Mexican heritage he specializes in Mexican food. Kevin is also a sculptor and has created many superb and whimsical pieces. Both Lisa and Kevin have worked for over twenty years in the restaurant business.

Lisa and Kevin decided to scale down their energy and enjoy life a bit more and that meant being closer to very, very good friends who happen to live in Wolfville, so a move was necessary and that’s how they ended up here.

In Victoria they decided that when they moved here they would have two small businesses; One business being a food truck specializing in Kevin’s passion for real Mexican street food (Kevin is actively looking for a permanent location in downtown Wolfville) and the second business would be for Lisa: a small retail space called Shiny Things, a curiosity shop serving their Mortiscycle Donuts and Anchored Coffee by Two if by Sea in Halifax. Well, the truck has yet to get to set up but they have the dough so, Shiny Things is scheduled to open in March at 416 Main Street, Wolfville, next to the Rolled Oat Cafe. The shop will be specializing in cool found objects and vintage pieces as well as local art pieces plus the couples signature pastries.

And what exactly are Mortiscycle donuts?? Well, Mortiscycle means “Death Cycle,” a hand-made replica of a 1910 board track racing motorbike and when Kevin is not driving it around town, it will be in the front window of Shiny Things for the whole world to see. As Lisa explains, “The name Mortiscycle came from Kevin and I meeting late in life and me not wanting to call Kevin ‘my boyfriend’ so I called him (and still do) Mon Amour. He then started to call me his Mon Amortis or Mortis…the motorbike was named after me…MORTISCYCLE”

Kevin and Lisa opened their donut company in Victoria in the spring of 2013 and when they left Victoria a fellow pastry chef took over the West end of MORTISCYCLE DONUTS so technically they have both a WEST & EAST coast connection! The hand-made donuts were a huge success in Victoria and they knew that when they came to Wolfville they wanted to bring it with them.

As I mentioned, you can find Lisa and Kevin at the Wolfville Farmer’s Market on Saturdays but you better arrive early because they sell out fast! Their “DEATH CYCLE DONUTS” have become a huge hit with the Market crowd.  You can find them on Facebook under Mortiscycle Sideshow. Email Kevin and Lisa for orders or with questions at mortiscyclesideshow@gmail.com or call Lisa at 902-599-1008. Have you tried one of their nifty creations yet? With terrific names for each donut like the Hells Angel, Blue Bobber, Two Stroke, True Grit, Ghost rider Or the Neutral…just t name a few, you will GO NUTS for their DONUTS! Best of luck Kevin and Lisa! 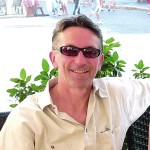 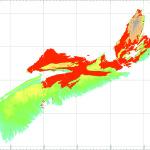