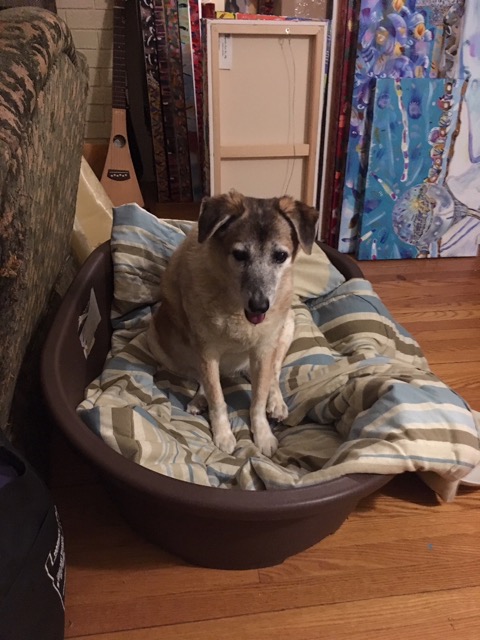 An Obituary for a Beloved Dog
By Wendy Elliott

Recently May the dog passed away peacefully in the Quiet Room at the Cornwallis Veterinarian Clinic. May’s owner, Judith Leidl, says she was part of the family. “She came to us from Thailand, through the Soi Dog Foundation,” Leidl said, “having been a street dog, and then a shelter dog. Her long journey to Nova Scotia was instigated by the caring people at the foundation.”

The first days with May were not easy. She bolted early in her stay just seconds one day after her lead was removed. A slightly ajar back door (so the cats could go out and not disturb her), was her doorway to freedom. Her escape led to a big community effort to get her back, including a call out in The Advertiser for May’s return. This was before social media allowed for lost dog postings.

Later Wanda Coldwell called Leidl after the sighting that led to her capture/rescue. “As a family we were determined to get her back,” she said. “Eleven days later, which included many forays into the countryside, we did. Think cows, some a wee bit aggressive, a live trap with pepperoni as bait and a late evening installation of the trap in question.”

From there the journey continued, as May was deeply traumatized. She was always nice to her people, which included a pod of cats: Nutmeg, Giles and Edward, as well as Leo, her canine companion. She was not aggressive on walks, or trips to the vet, but always very afraid.

“It took May two years to stop trembling, another year to stop hiding under an upstairs bed,” said Leidl. “Eventually, only about a year ago, she decided that being downstairs with all of us was the best course of action. In essence, near the end of her long lifespan, May became (like Pinocchio wanting to be a ‘real boy’), a real dog. May lived with us for nine years.”

“She enjoyed many moments of joy and trusted us enough to roll on her back, exposing her tummy and kick her legs in the air. One of her greatest joys was scarfing down the cats’ wet food, even as they were trying to eat it. May could smell cat food that was on the third floor when she was on the first. I don’t know what they put in it…” Leidl said.

Missed by all of us, friends, and extended family.
Love Always: May, R.I.P. 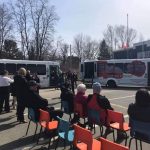 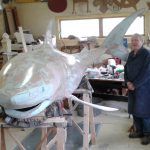