Mark Bezanson was sort of like Mr. Snuffleupagus to me for the last few years! I had heard of him, seen videos, knew people that had met him, but he and I had just never been able to meet up. Well, all that changed when Mark boarded the Magic Wine Bus a few weeks ago and drank with me all day! The connection was made and now I get to write about Mark so each of you can meet him.

Mark was born on the South Shore in Chester Basin, moved to Port Hawkesbury, Cape Breton, and then ultimately back to the Chester area, where he finished high school.

“I had incredibly supportive parents who, even though they didn’t have a lot, always made sure I had music lessons,” Mark says. “I was that kid who loved to sing in music class. I quickly turned into a band nerd in grade five when I started playing the coolest of all the band instruments: tuba! I picked up a bass in grade eight, got serious in grade eleven, and I started playing in bar bands at age seventeen in the South Shore and eventually decided to go to university at StFX, after the professors heard me play at a music festival.”

Mark obtained his degree in jazz, found the love of his life, Laura, got married, and then went on to get a bachelor’s degree in education in 1995, as teaching was always a passion. Mark landed a full-time music teaching job at Bridgetown Regional High School. Laura and Mark started a family soon after, and the rest is history! 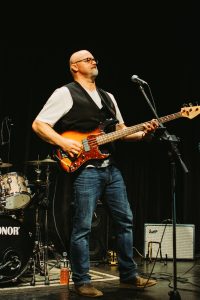 Sounds like a busy beginning eh? According to Mark, it was: “I was in a band that recorded a few CDs, Jug in Hand, but found that teaching and playing three nights a week and raising two boys and working on a master’s (in middle level curriculum) was too difficult, so I stopped playing for about seven years.”

Mark has always loved the blues, and at 34 years old he started singing and eventually wrote and recorded a CD with the help of many great local players. It was produced by Caleb Miles and it’s called Half Lies Half Truths (you can find it on iTunes and directly through Mark by email lm.bezanson@ns.sympatico.ca).

At present, Mark is involved playing bass and singing with The Idle Threats. They play a mix of rock, soul, and old rhythm & blues, and can play a few sets of jazz standards. They also become Mark’s band when he does shows of original music. Mark also sings and plays bass for Joker’s Right, a high energy classic rock band. Both bands play all over Nova Scotia, from corporate gigs, weddings, pubs, and clubs to backyard parties. “I consider the players in these bands to be more like family than band mates,” Mark says. “Most recently, I sing back up for Bluesmobile, which is a great 15-piece show band with 5 singers, a rhythm section, and horns. It’s always amazing singing with them. I am blessed to have such rich opportunities to play with such outstanding musicians in such a variety of styles. Playing with all these wonderful bands keeps me interested and passionate. Music has always been my life. It’s not really a choice, it’s more of a life sentence.”

To see what Mark is up to, book a band, or to book Mark, check out markbezanson.com, or find him on Facebook. MARK my words, this fella is pretty incredible! 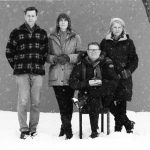