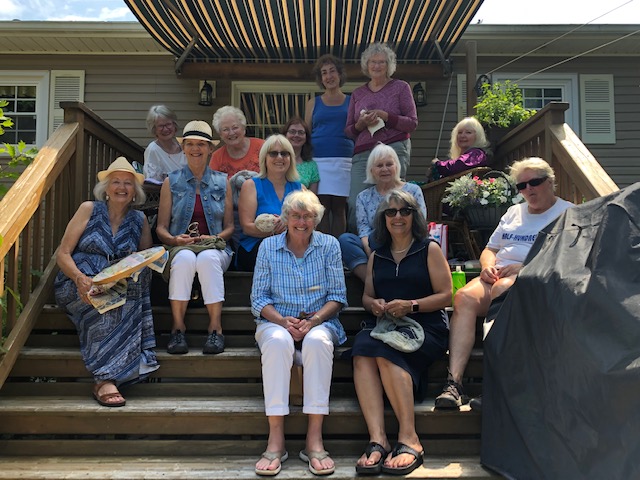 If you enjoy needlework while chatting with friendly people, the Newcomers needlework interest group is for you. As one member said, “It’s not about what you’re making or how good you are, it’s about getting together.” Another needleworker said, “It doesn’t matter how crummy your work is, you’re accepted.”

Friendships formed while working on individual projects are the top benefit of the group. Valuable is the help offered by those with greater expertise, to correct a stitch, turn a heel, or solve another thorny problem.

Knitting is the most popular craft, but cross-stitch, embroidery, mending, quilting, and rug hooking are all worked on by participants. Your project isn’t listed here? Bring it along to the next meeting and share your enthusiasm for your craft with others.

The group was started six years ago when a recent arrival to the area mentioned she wished the Newcomers club had a needlework interest group. She was told, “You can start one!” A sign-up sheet was put out at the Newcomers club meeting.

Four to six people came to the first needlework meetings. Now ten to twenty persons come twice a month on Mondays, even over the summer. Members bring folding chairs or sit on a stair if the group is large. Individuals host a meeting if they can, and often those who cannot host offer to bring the snack. Twice a year the needleworkers gather for a potluck dinner, usually during the Christmas season and in June, because friends delight in sharing a meal. Membership remains open for new needlework enthusiasts.

For more information about the Newcomers club, contact us through
wolfvillenewcomers.org. Look for announcements about the 3 September 2019 meeting which will draw the membership together as a whole and provide an opportunity to learn about all the interest groups.