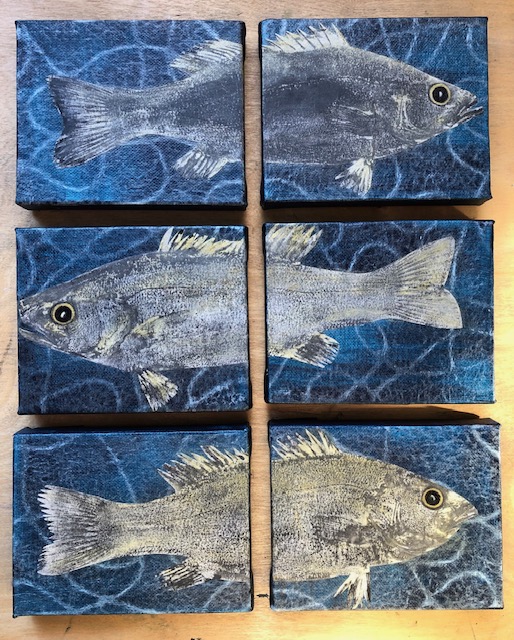 Rachel Reeve has fish stories like no other. Her studio walls are hung with precise images of actual fish, caught here in Nova Scotia, recorded using an age-old printing method which originated in Japan. How and why is an interesting story on its own.

Reeve has an interdisciplinary Bachelor of Fine Arts degree from the Nova Scotia College of Art and Design, which seems totally fitting for this highly creative artist. As an art educator and printmaker, she also works in mixed media, design, and installations with found and repurposed objects. She loves innovation and being resourceful, and finding things and seeing the potential for something new, which generally means she has multiple projects on the go at any given time. “There is something really exciting about that,” she explains. “It’s all about growth.”

Part of that growing process took Reeve to Japan where she taught English from 1998 to 2001. There she found her own affinity for nature was mirrored in Japanese culture, and her art making was enriched through the experience of living and working in that atmosphere. She exhibited her own work during this period, but she was also soaking up new ideas and inspiration for the future.

Back in Nova Scotia, a chance conversation with a friend about a fish he had caught reminded her of a very old and unique type of printing she had discovered while living abroad. Gyotaku is a type of printing from nature which originated in Japan during the mid-1800s. Fishermen eager to record their catch devised a method of making a detailed print from the actual fish they had caught. Non-toxic ink was brushed directly on the fish before carefully pressing rice paper over the fish to lift off a permanent image. The fish could then be easily cleaned and eaten with the proof safely preserved. This was easy in theory perhaps, but required patience and skill to achieve accurate results. Reeve managed to record her friend’s American shad and soon added images of bass and perch to what has now become a series. 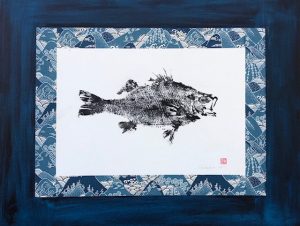 Reeve is eager to connect with local fishermen as she would like to record a broader range of fish for a future exhibit. At first, her project was simply about the printing process, but has expanded to questions about what fish mean to us, and the problem of invasive species like the chain pickerel now found in local waterways. The artwork has also developed from simple prints to collages combining Japanese papers on canvas. They pose timely questions and suggest symbolism and historical markers.

The artist’s property in Greenwich is an oasis of thoughtfully planned rock gardens, pathways, and selected trees she has planted, like pine and Japanese maples. Her home and art are all about “honouring the natural world” and her studio attests to this dedication. Drawings of pheasants and bats, a cardinal’s nest, and a multitude of fish prints fill the space, interspersed with a curiosity of found objects destined for new purpose. Sustainability is perhaps equally important to Reeve and she marries these interests together through her art.

Rachel Reeve may be contacted by email at aiaigasa30@hotmail.com.