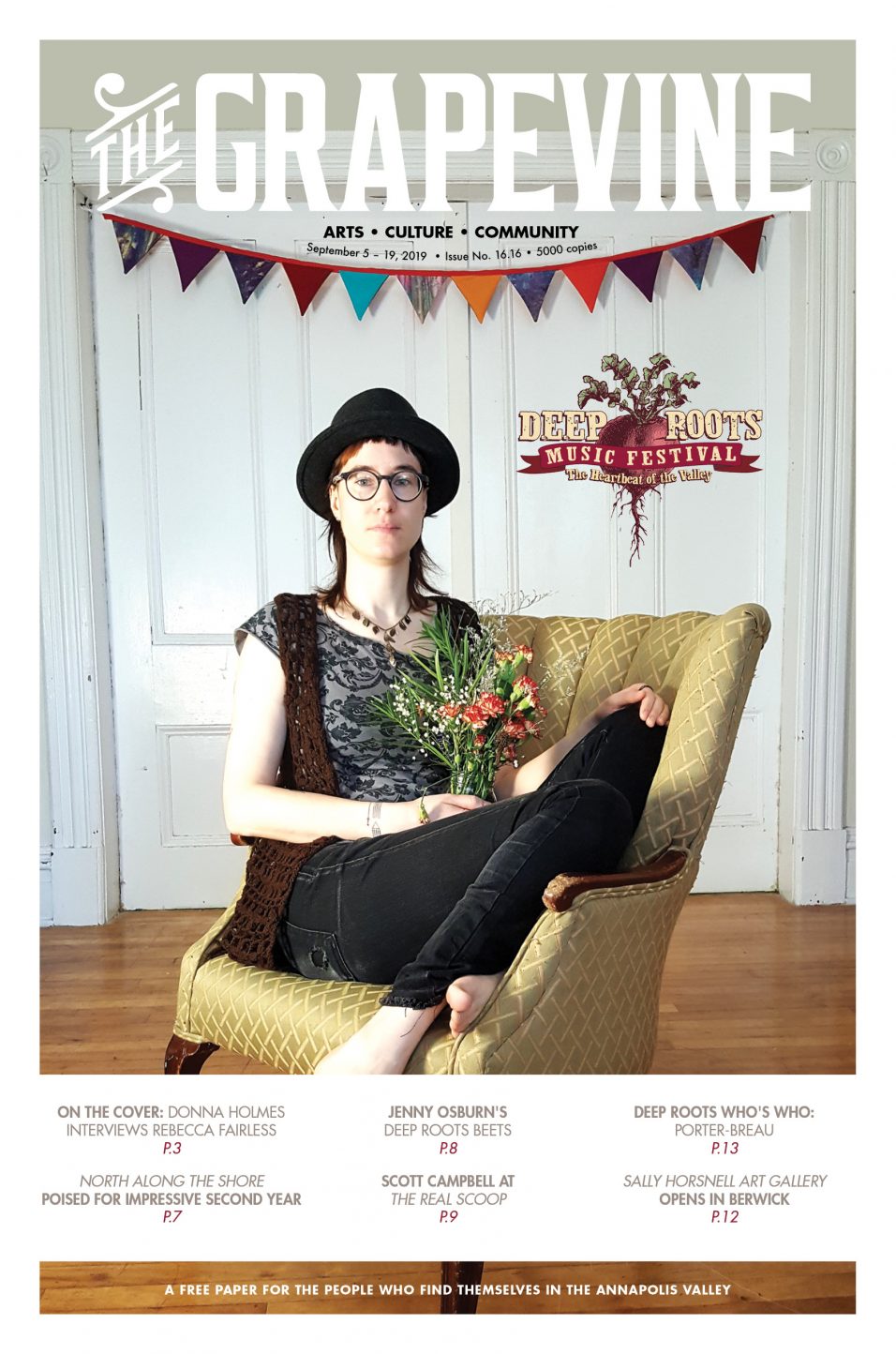 On the Cover: Rebecca Fairless
By Donna Holmes

I met Rebecca when we were both working with Deep Roots in 2015. Probably the first time we spoke about more than just the Deep Roots program booklet was when I interviewed her about her cat tattoo for the “Show Me Your Ink” column I used to write in The Grapevine. It has been my pleasure to do another Grapevine interview with Rebecca, this time about her upcoming performance at Deep Roots:

Donna Holmes (DH): We both love cats. Do you have any kitties currently living with you in Halifax? Have you ever written a song about cats?

Rebecca Fairless (RF): We do have a feline roommate living with us, Sasha the cat. I’ve never written a song about a cat, although birds have made it into a couple of my songs. There are an awful lot of songs about birds in the world–I probably should write one about a cat.

DH: I was so jazzed to watch your CD release concert with Ellen Torrie, Sarah McInnis, and Kimberly Matheson last year. I know Ellen is in Montréal, but will you get a chance to do any performing with Kimberly or Sarah while you’re in the Valley for Deep Roots?

RF: Sarah and I will be sharing a couple of stages during this year’s Deep Roots. We’ll both be playing Friday afternoon at the tent and Saturday afternoon at the Al Whittle. And Saturday morning we’ll be leading the Harmony Singing Workshop. I’m hoping she’ll lend her fiddle and her voice to at least a couple of my songs. I’m also a super fan of Kimberley’s! Hopefully we’ll get a chance to jam during the Deep Roots weekend.

DH: You used to be a regular at my weekly open mic here in Wolfville, have you had a chance to perform much in the city? When? Where? What’s your favourite Halifax venue?

RF: I miss Open Mike and Donna! Here in Halifax there’s a groovy little place called Open Mic House. It’s a private home on Agricola Street that opens its doors every Monday night to anyone who wants to share their music. I always meet interesting people there.

I have a few different musical projects on the go here in Halifax. I sing in the choir at St. George’s Anglican church, where I’m also taking pipe organ lessons. The pipe organ is a beast of an instrument and I enjoy the challenge of trying to master it! I’m also in a jug band called the Haltown Stompers. We sing old-timey songs and play makeshift instruments such as the washtub bass and washboard percussion. And I perform my own songs when I get a chance. I’m excited to be part of Deep Roots as an artist this year. I’ve volunteered every year since 2014.

DH: You are a music therapist. Tell us a bit about that: what do you love about it? What are some of the more challenging bits? Do you find it influences your songwriting?

RF: To help people find their own voices through music is immensely rewarding to me. Throughout my life, music has given me a voice to express important truths when I struggled to do it through words alone. It’s helped me to connect with other people, and feel heard and understood. Music therapy is all about that relationship–finding meaningful connection to another person through music can heal a lot of hurts.

I’ve also had some of my most profound experiences working with people who are non-verbal, such as the babies I spent time with during my internship at the IWK children’s hospital. We communicated through pure, unfiltered sound, free of the self-judgements we learn as we grow older. I learned a lot from those babies.

The big challenge for me right now is finding consistent work as a music therapist. Many organizations understand the benefits of music therapy, but the institutional funding for it isn’t always there. It’s been a lot of self-advocacy and grant writing work. But it’s starting to pay off: I’ll be doing music groups in the fall with two youth organizations, and I have a baby music class on Friday mornings, which is a barrel of fun. Jamming with babies is the best!

My songwriting has deepened since I went back to school to study music therapy. I’ve learned the importance of writing songs that are honest to my own experience, and trusting my own musical intuition, even when it takes me to a dark place. Most of my songs emerge gradually as I process difficult emotions and experiences in my life.

DH: Hosted any good house concerts lately? Got any fun ones on the horizon?

RF: For the past year, my roommates and I have been putting on concerts in our living room. Our last house concert featured a folk duo from Ontario called Tragedy Ann. They were incredibly talented and charming, and they played the singing saw! It was pretty magical. We’re on hiatus this summer, and I’m not sure when we’ll start up again. I’m actually trying to move beyond the comfort of my own living room to do more public performing.

Check out Rebecca Fairless at the Deep Roots Music Festival on Friday, September 27 at 1pm in Clock Park; and Saturday, September 28 at 10am & 1:30pm in the Al Whittle Theatre.

Donna’s Upcoming appearances include opening for David Francey at Deep Roots at the Wolfville Memorial Library Friday, September 27, 2019, Noon, and with Broken Leg Theatre at the Al Whittle in Wolfville on Saturday, October 5, , 7pm (facebook.com/BrokenLegTheatre/).

Rebecca was photographed by Rena Thomas, a film maker and photographer from Halifax (keepgoodtheatrecompany.com/rena-thomas/). Rena is also the Deep Roots kitchen coordinator (kitchen goddess, some would insist!). The Grapevine would like to apologize for the omission of Rena’s credit for this gorgeous photo in our print edition. 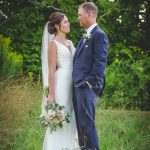