The Box of Delights Bookshop has officially announced that the store will be closing at the end of September, 2019. This news has been met with a mixture of sadness and nostalgia from the community.

Founded in 1972 by Hilary Sircom, The Box of Delights Bookshop is named after the British children’s novel by John Masefield. In 1991, it was purchased by Mitzi DeWolfe, who upheld a high standard of community-oriented bookselling during some difficult times in the industry. The beloved bookshop carried a wide range of genres with a special focus on children’s books and local interest, as well as a selection of stationery by local artists.

However, this space was much more than a bookshop. It was a box office for community events, a space for public dialogue and literary gatherings, and a testing ground for emerging authors, poets, publishers, and artists. For many years, The Grapevine used The Box of Delights as our headquarters, alongside the Deep Roots Music Festival. The downstairs level provided a space for this paper to grow and flourish. Cultural hub spaces like The Box of Delights are important to fledgling organizations, as they provide an arena for the exchange of social and cultural capital. We owe our close relationship with the Deep Roots Music Festival to The Box of Delights, as well as many of our connections to local writers, academics, and engaged citizens.

With heavy hearts, we bid farewell to The Box of Delights Bookshop. We can only hope that this storefront in the heart of Wolfville will appeal to another community-minded individual like Mitzi. 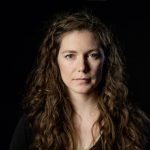