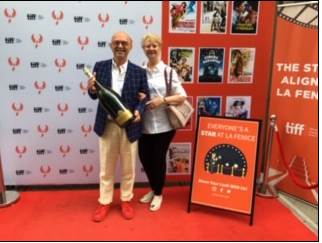 The Devour Food and Film Festival held an advance launch party in Toronto on September 8, during The Toronto International Film Festival (TIFF). The event was held in a tented venue outside the historic Campbell House Museum on Queen Street. In keeping with the Italian theme of this year’s upcoming festival in Wolfville, the evening was hosted by the Italian Trade Commission. 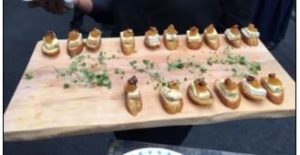 The complimentary bar offered refreshing Aperol spritz, Campari spritz, and red and white wine as well as prosecco. The Italian-themed food was plentiful and delicious. A variety of freshly-baked pizzas were provided by the slice by Pizzeria Libretto. Wait staff circulated through the mingling crowd with a plethora of tasty bite-sized appetizers: savoury prosciutto was wrapped around figs and julienned carrots to make a sweet and salty treat with a pleasant toothsome crunch. Parmesan crisps were served with sweet quince jelly. Several varieties of perfectly toasted crostini were circulated, some topped with creamy gorgozola, apricot preserve, and walnuts. Others had artfully arranged crisped prosciutto adorned with a dollop of buttery mascarpone. Another featured smoky speck decorated with a morsel of whipped butter. Adorable bruschetta tartlets provided a garlicky-tomato hit with a hint of basil. The tiny meatballs wrapped in crunchy angel hair vermicelli were not to be missed, as well as the carpaccio roll-ups containing flavourful greens and topped with mustard. Warm mushroom caps contained what appeared to be melted fontina cheese and herbs.

Other items were offered. Some so popular, they barely made it past the entrance from the kitchen. For dessert, luscious mini cannoli and cocoa-dusted truffles made the rounds. Cups of espresso were available to top off the night. Everything was carefully and expertly prepared to satisfy every taste bud and provide a delicious preview of what we may expect to enjoy in October. Yum! Can’t wait. 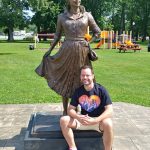 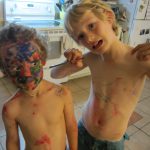