A Mushroom Foray at The Booker School
By Jen Wheeldon

On Friday September 13, the ‘early years,’ primary, and grade one classes at The Booker School in Port Williams spent the afternoon exploring the school forest with Jocelyn Hatt and myself, Jen Wheeldon. As amateur naturalists and mycologists, Joss and I frequently spend time in the woods with our respective children. My daughter Norah attends The Booker School, and they spend time outdoors and use the natural environments at the school, such as the forest on campus, to enhance learning opportunities. The students at The Booker School often go on hikes and play in the woods, providing them with the opportunity to ask questions about the natural world around them. Knowing that the warm fall weather in the Annapolis Valley produces interesting and beautiful varieties of mushrooms, we hoped that the children would be captivated with the world of fungi. I approached the Head of School, James Weekes, who met the idea with enthusiasm. We engaged the younger classes first, with plans for future mushroom forays with the older students.

Accompanied by early years/primary teacher Madison Rafuse and grade one teacher Jamie O’Hanlon, the children first learned some basics of mushroom foraging (collecting) and forays (exploring) before heading into the woods. We started our foray by talking with the children about proper foraging etiquette, putting the excitement of finding mushrooms into the context of appreciating the impact that one little mushroom can have as part of a larger ecosystem. We explained that mushrooms are the ‘fruit’ of the whole fungi organism which grows from mycelial strands underground, and that their ‘seeds,’ the spores, need the opportunity to release to allow the mushroom to propagate. The students learned the importance of taking one mushroom to examine and learn from, while leaving the rest to spread their spores for the next year. We were lucky to find puffballs which have spores that ‘puff’ out when mature, lactarious mushrooms that produce a milky latex when the gills are cut, bright colourful (and poisonous) amanitas, an artist’s conk that was used as canvas for the students names, and a variety of mushrooms that allowed for rich conversation and questions. As the students encountered mushrooms that had been eaten by slugs, they understood that forest insects enjoy mushrooms as food and that they should not take the mushrooms out of their natural environment unless they were going to use them for learning or food themselves! The students showed an incredible capacity for recognizing and appreciating the natural beauty of the forest. The children were excellent mushroom spotters and each had opportunity to pick one or two. Some mushrooms we were able to identify right away and with others, students learned how to use a field identification guide book.

In making spore prints (by removing the stalk and placing the mushroom cap down on paper with a bowl to cover for a few hours), the children were able to see how spores descend onto the paper making a beautiful print used to identify a specific mushroom. Some mushrooms looks very similar, so knowing how to identify mushrooms by smell, appearance, spore colors and size helps to know if it is safe to eat. The Booker School students didn’t eat any of the mushrooms they foraged. Learning that there are some mushrooms that can be used for teas and medicines, some for food, and some that make you sick, the students understood the importance of having solid information to identify mushrooms with certainty before eating them. 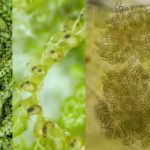