Each year I’m asked to give my recommendations for the Devour Food Film Festival movies that I think would be the most interesting and entertaining. Admittedly, my selection process is less than scientific. I read the descriptions of the films just like everyone else and try to decide if they’d make my list. So, with that in mind, here goes:

My first selection is Big Night. This is the film that celebrity Chef Lidia Bastianich curated. I’ve eaten at several of her restaurants and I enjoy her cooking shows so it seemed like a natural choice. Imagine my delight when I discovered that one of the movie’s directors was Campbell Scott. With a name like that, I’m sure it’ll be a great film. Here’s a brief description: Chef Primo (Tony Shalhoub) and businessman Secondo (Stanley Tucci) are immigrant brothers from Italy who open their dream restaurant in New Jersey. However, Primo’s authentic food is too unfamiliar for the locals’ tastes, and the restaurant is struggling. When bandleader Louis Prima is scheduled to appear at their restaurant, the two brothers put all of their efforts into one dinner, which will ultimately decide the fate of their restaurant.

My second selection would be Honeyland. I liked the description of this film as soon as I read it. As you may have gleaned from the title, this documentary is about bees. I’m an advocate of helping to preserve our bee population (if they go – we go) and I love documentaries. This seemed like the perfect pairing. Here’s the description: This powerful documentary follows Hatidze Muratova, a Balkan woman utilizing ancient beekeeping traditions to cultivate honey in the mountains of Macedonia. When a neighbouring family tries to do the same, it becomes a source of tension as they disregard her wisdom and advice.

My last pick for this season is a short film that I think is going to be fantastic. It’s called Is You Is? I can’t tell you much about it because it will be having its Canadian premiere at Devour this year, but what I can tell you is that it was created by the talented team of Leanne Bishop, Michael Mason, and Kelly Perine. If you think those names sound familiar, well, they should. This is the same talented troupe that brought us the award-winning short films Reservations For Three?, and Candice & Peter’s Smokin’ Hot Date, both of which have appeared at Devour previously. With a lineage like that, Is You Is? promises to be just as delightfully tummy-tickling as its predecessors.

So there you have them. Be sure to take in as many of the Devour films as you can. This will be a rare opportunity to see some of the most fantastic cinematic creations in the world of food films. Cheers. 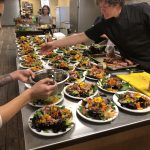