Equilibrium Engineering’s plan to develop an intelligent energy system with its Scottish partner StorTera and the Town of Berwick has officially kicked off. In September, the energy services firm held a lottery for Berwick residents interested in having a free residential storage (and possibly solar) system installed in their homes. The lottery saw 78 residents enter their name in the draw and 10 lucky winners were chosen.

Design work on installations of the household systems have started, and homeowners are looking forward to becoming more energy efficient, saving money, and being part of the Town of Berwick’s plan to provide value to Berwick Electric (the energy grid operator) through the uptake of renewable energy.

In addition to the residential homes, the waste water treatment plant, Town Hall, and the Kings Mutual Century Centre are also participating in the project. They too will see benefits such as lower energy costs by managing their demand, increased resilience with onsite storage, and coordination of overall performance with Berwick Electric.

“It’s exciting to have rural Nova Scotia leading the low carbon energy transition movement through an advanced energy storage project,” says William Marshall, President of Equilibrium Engineering. “We are thrilled with the interest the Town of Berwick has in this project and we know residents will be watching it closely in anticipation of converting their homes in the future.” Funding for this pilot comes after Equilibrium Engineering and its project partners, StorTera (Scotland, UK), and Dalhousie University’s Renewable Energy Storage Lab pitched a winning proposal to Natural Resources Canada as part of the Power Forward Challenge. It brought firms from Canada and the UK together to collaborate on energy distribution projects. Out of the 44 projects that were initially submitted, seven were shortlisted and three proposals were approved. 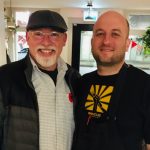