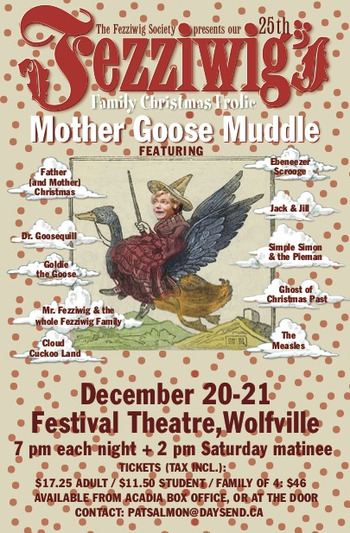 This December will mark the 25th anniversary of the Fezziwig Family Christmas Frolic. To celebrate, the cast is reprising its very first original pantomime, Mother Goose Muddle.

“We keep doing it because it’s really fun to stage these shows and so many people get enjoyment out of it each year,” says director Wendy Elliott. “It brings a whole community together to laugh and sing — that’s always the best part.” This year’s script is the first to be repeated. It features the familiar Victorian Fezziwig family hosting their annual holiday party, much as Dickens imagined.

Mother Goose Muddle was originally written in 2002 by well-known Nova Scotia theatre director and writer Ed Thomason. Gus Webb recently reworked the plot and added contemporary references and musical stylings. Many of the community’s favourite actors are back in the cast, including: Wil Lang and Emily Lutz as Mr. and Mrs. Fezziwig, Jamie Loughead as Ebenezer Scrooge, and Alan Slipp as Mother Goose. Much-loved alumni Ray Baltzer and Sherry Bishop are taking part again this year. Mayor Jeff Cantwell is reprising his role as Father Christmas, and this year he will be joined by Mother Christmas played by Mike Butler. The talented Graham Howes is back playing keyboard accompaniment in many musical styles.

Pantomime is a seasonally popular form of theatre with roots that date back as far as ancient Greece. The story is usually based on nursery rhymes and fairy tales, but with a fun twist. Audience participation is expected as audience members are encouraged to ‘boo’ the bad guy and cheer for the hero. Comedy is always a big factor in a ‘panto.’ The Fezziwig creative team knows that while children in the audience will enjoy the elaborate costumes and audience sing-along, adults also get the sly double entendres cleverly woven into the script.
Often in panto some of the show’s primary comedians perform over-the-top in drag to ramp up the humour. Did we mention Mike Butler is in the show?

And all of this will be trotted out in hilarious fashion as Fezziwig’s Family Christmas Frolic presents Mother Goose Muddle.