Dr. William H. Brackney, an emeritus professor at Acadia University, has recently been recognized twice for his significant work in the areas of Christian thought and ethics. Brackney came to Acadia in 2006 to join the Faculty of Theology and retired in 2018, but continues as an adjunct in the Department of History and Classics.

On September 28, Dr. Brackney, the author of over 50 works, was honoured with a festschrift volume, Crossing Baptist Boundaries, published by Mercer University Press. Sixteen scholars from internationally-recognized institutions in Canada, the United States, Europe, and Australia, provided essays in honour of Brackney’s work. A major European ecumenical scholar, Dr. Erich Geldbach of the University of Bochum, edited the book. A festschrift is an unusual recognition of a scholar’s lifetime work, usually coming at the time of retirement from active service.

A second event highlighting Brackney’s work occurred on November 12 at Acadia’s Vaughan Memorial Library. Local colleagues gathered for the public rollout of Dr. Brackney’s 3-volume set, Walter Rauschenbusch: Published Works and Select Correspondence. Rauschenbusch was a German-American social theorist who spent his summers in northern Ontario. He is considered the fountainhead of the social gospel movement. On the centenary anniversary of Rauschenbusch’s death in 2018, scholars from various disciplines—religion, law, human rights, and economics—have again recognized the impact of Rauschenbusch on many institutions. Rauschenbusch, for instance, was a guiding influence behind Tommy Douglas in working to create Canada’s national health system. For five years, Brackney headed a team of international scholars in assembling original authoritative texts of Rauschenbusch. He also contributed major introductory interpretations to two of the volumes.

Dr. Brackney and his wife, Kathryn, live in Grand-Pré, where he continues research on human rights and global poverty issues, particularly focussed on the major religious traditions. 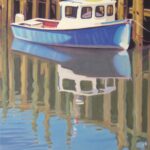