All About Icewines
By Kim Cyr

The Nova Scotia Icewine Festival is about to happen over two consecutive weekends this February. The events will be held collaboratively at Lightfoot & Wolfville Vineyards, with many distillers and vintners participating. The events include a gala, fireworks, a multi-course dinner with three chefs from three of our wineries, and 4 days of tasting events (February 14-16 & 22-23, visit nsicewinefest.com for more information).

The Definition of Icewine
Canada is the largest icewine producer in the world. It is estimated the icewine crop is responsible for billions annually. In Canada, we have a federal legal definition of icewine: It must be ”made from grapes naturally frozen on the vine.” In Germany, this wine is referred to as Eiswein and has been produced since the 18th century and has the strictest rules of production. Many Canadian wineries follow the strict German doctrine of harvesting and production and quality. Some other areas do make this style of sweet wine by using cryogenics or freezing techniques on their grapes. There are only a few countries that can produce icewine without manipulating nature, with Canada being the foremost. Luxembourg, Austria, Germany, and the northern United States are among the other countries that produce this style of wine naturally.

The Hard Facts
-Natural icewines require a hard freeze.
-Grapes for icewine are picked at minus 8C or colder. They say the optimum is between minus 12 and 14.
-Grapes are typically picked at night so the concentrate isn’t diluted by the morning sun
-Many wineries harvest after midnight on the first or second cold night when these temperatures are achieved. They try to so on first night so the grape does not thaw and refreeze
-The grapes must be pressed almost immediately so as not to dilute the juice. Only 15% of the juice is left at this time.
-The primary varietals used in Nova Scotia icewine are Vidal, Riesling, and Muscat.
-Red grapes are often used in Ontario and British Columbia, primarily Cabernet Franc & Cabernet Sauvignon ( longer ripening grapes).

Icewine Trivia
-British Columbia was the first place in Canada to release a commercially-produced icewine (a 1972 Hainle Vineyards, which sold in 1978).
-One bottle of Ontario’s Royal DeMaria Vineyards Chardonnay icewine once sold to a Saudi prince for $30,000. This 2000 Chardonnay icewine now goes for 250,000$.
-Counterfeit Canadian icewine is a huge market in China. One imitation icewine bears the Canadian maple leaf on the label. It is said that up to 50% of icewine sold in China is counterfeit.
-Approximately 80 percent of Canadian icewine is exported.
-The authoritative Peter Gamble, one of the consultants for Benjamin Bridge and Lightfoot & Wolfville and other steering committees within our province, was one of the first on the scene in Ontario experimenting with icewine in 1982.
-Some of the world’s best sommeliers gathered in Moscow and unanimously voted icewine as the better match for caviar versus champagne. The conclusion drawn was that champagnes had gotten drier and drier over the last century and that the saltiness of caviar needed a counterbalance from the luscious sweetness of Riesling icewine
-Poutine was voted our national dish over icewine and Canadian blue
cheese. This pairing has won international acclaim when brought to food pairing challenge competitions in Europe. 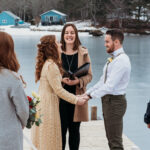