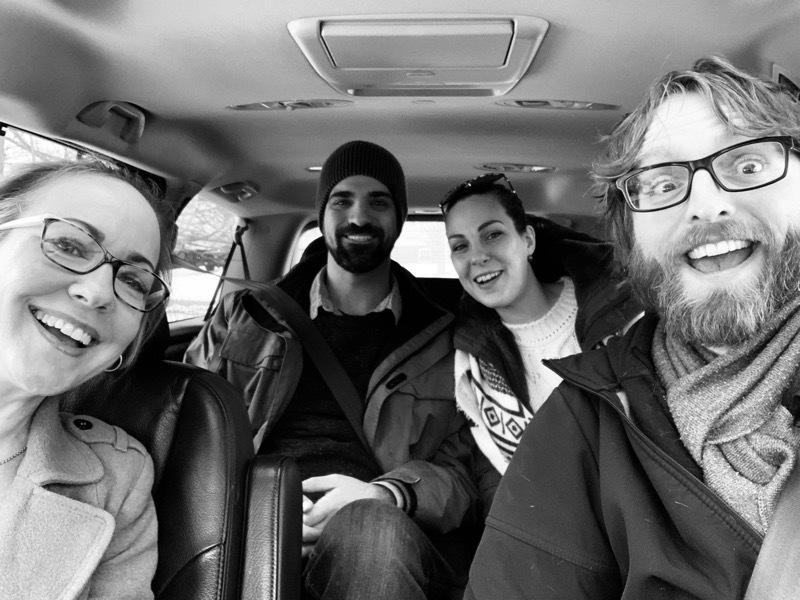 Jeremy’s What to Try: Season 2
Jeremy Novak, Where It’s At Tours

In order to truly understand Where It’s At for this article, a few road trips were necessary. With a dedicated squad of designated drinkers, I was able to safely navigate the Where It’s At minivan all over this delicious Valley.

Lequille is a good hour down the Valley from Wolfville. The weather was perfect and so was the timing to stretch the legs. I remembered the Still Fired Root Beer Moonshine from Devour and yes, it’s just as good now as it was then. Their website has a recipe for a root beer float: I have zero doubts.

The knowledgeable bartender suggested adding strawberry rhubarb to a light beer. Duly noted. We purchased that along with a Moonshine Sampler Pack.

I felt like a local in the Annapolis Brewing Company. We arrived midday, sidled up to the bar, and were immediately welcomed by Joe the cheerful bartender. In no time we were besties with all present, including their self-described resident Norm Peterson/Cliff Clavin hybrid, Ralph.

The Annapolis Brewing Company opened up in 2018 and is apparently absolutely rocking during the tourist season. As it says on their website: “Many a battle has been fought over this town and many a beer spilled we are sure. Here’s to spilling many more!”

Michelle sampled them all (#truededication), and we walked out of there with a couple of growlers of their King James Porter and the Fenwick Ale.

All the stops on this trip were new to us. Exploring how our craft producers are standing out is a big part of the fun. Lunn’s Mill has repurposed an old Department of Natural Resources tree nursery. They’re using this unique space to create seven signature brews and to host various community events. What a place!

Lunn’s bartender Gareth was a true representative of the business and the industry, explaining how he gave up on a Toronto lifestyle to return to the Valley he calls home. We left with growlers of the Anvil Porter and a Charming Molly Blonde Ale, named after the ship that brought the first wave of New England Planters to the area.

For the final stop on our first road trip, we lucked out at Roof Hound by having their kitchen head and the owner of the entire operation, Chantel and Les, as our bartenders. Lovely couple, his story being on Masterchef is pretty remarkable. He had opportunities to be the chef for various bigwigs afterwards, but he would not be deterred from his plans in this Valley. A toast to that!

We were pretty hungry at this point, so we ordered the pulled pork and kettle chips with blue cheese and balsamic reduction. Absolutely yes. The souvenirs we left with were the Rye-it Amber, the Big Brown, and the Orange Phoenix Stout.

We tried to make it into Berwick to visit Bad Apple and the Smokehouse Nano Brewery, but we ran out of daylight. I know! I’m as surprised as you to learn that there’s now two breweries in Berwick. Another road trip to where it’s at awaits!

I’ve noticed the Smiley’s Park provincial highway signs since forever, so it was impossible not to smile as we passed its entrance. The bouncy country roads then led us to Meander River Farms, a functional farm with livestock, hops, and lavender. They also have the best greeter, Phoebe the Irish wolfhound.

I was first exposed to Meander at The Flying Apron restaurant in nearby Summerville. Now that’s a winning West Hants combination! We left with a Lunch Box Pale Ale growler and their Porridge Oatmeal Stout. You’ll notice the dark-beer theme continuing.

Of note, at the end of summer Meander will be offering another round of limited shares in their community shared brewery and cider program. It’s not uncommon to see wine clubs at wineries, but this stands out to me.

In order to be thoroughly prepared for these road trips, I typed ‘Breweries Annapolis Valley’ into Google, and that’s how I discovered Hilltop Hops. More or less, as soon as we took Exit 5 after Windsor, a jacked-up truck came up hot behind us. I pulled to the side and he roared by, rocking a large Straight Outta Hants County sticker. It made the decision pretty easy actually: I wasn’t leaving Hilltop without a Hants Co. Proud Pale Ale growler.

Hilltop Hops has a come-as-you-are feel to the place, no need to change your footwear. John the owner and bartender was willing and able to talk shop, or just let us be. No shortage of patrons walked through, growlers-in-hand, during our stay, so I was confident to also get a Redtail Red Ale.

Under the shadows of majestic Martock, Bent Ridge serves up wood-fired pizzas and other Mediterranean delights year-round. Complimenting your meal is the most versatile sampler in the Valley: pick four from their wine and beer lists.

We ended up purchasing the Forks Cream Porter and the C &C Brown Ale. I was curious to taste how coconut and carrots (C&C) pair together. It works! Pico Breweries are fantastic for their bent creativity, aren’t they?

*Ahem…
My soccer team, Schoolhouse Brewery FC, the defending VMISL champions, is certainly best in class. I am not confirming that a grunter or two are known to show up in the dressing room after the games, but I can say that the team goes through Principal Ale, and Recess Pilsner like a dog eating homework. A postgame stop in at the Kings Arms Pub often involves a few Chequers Ales being lifted in celebration.

It’s an honour to represent this brewery on the pitch as Cam has become a brewing legend in the Annapolis Valley. If you follow them, you’ll know that they’re continuing to ace their marketing tests with their brand new “school bus,” once they paint it yellow.

As for the roadtrip, a trio of dips, kettle chips, and nachos were washed down by sample trays, all the while complimenting them on the overall vibe they’ve created. You should go to school.

The sun was setting on us at Schoolhouse, so we had to make haste for Horton. We gave them a call as their close was fast approaching. Jeremy and Connor were gentlemen, making us comfortable despite our late arrival.

I’ve been to the Horton Malt Shop more than once on tours, for concerts, and for workshops. They like their space being used, they’re pretty community-minded. They also make some fantastic beers while running a growing malt business. I walked out with six cans, heavy on the Rye’s Up Pale Ale and the Bar Dog Stout, arguably the best stout going right now.

I popped by the other day to taste their latest Something Different, Harvest Rosé. As always with this popular series, 50 cents of every Something Different refill supports worthy causes. In fact, they’ve raised over $30000 in just under four years and their current Harvest Rosé is in support of the Ronald McDonald House Charities Atlantic. This cider-and-wine blend features juice from locally harvested Marechal Foch grapes, co-fermented with fresh-pressed Gravenstein and Geneva Crab apples. Word is, their next Something Different will be a perry blended with arctic kiwis.

Looks like my birthday is lining up this year with a Paddy’s Open Mic Monday. I’m approaching a new decade, so a little familiarity will probably help with this big transition.

Both locations have always treated me well and over the years I’ve gone through phases of favourites. The Blueberry Beer (always with the blueberries), Oatmeal Stouts, and Cravens (half Cream, half Raven) have all had turns being the bière du jour. They’re always experimenting with new tastes too, like the Seven Seas Black IPA currently on the menu. Don’t be shy to ask for a sample or two.

Word is, their Burger Wars entry this year, starting April 1, will be a wild boar and portobello mushroom burger paired with a mushroom beer.

Open for over a full year now, I’ll forever have the honour of taking the very first order at The Church Brewing Company. It was at the 2019 New Years event, but I forget what the couple ordered. I really wasn’t their best server.

The Church is a true Wolfville destination. The heavenly acoustics combined with their impressive sound system set the stage for many more uplifting performances to come. For the best value, go to their beer market and walk out with 946ml Crowlers (cans, not a typo). Three Married to the Sea German Porters will take a while to pour, but love is patient.

I mentioned this in last year’s article, but Russel and Colleen continue to be lovely people. I popped in the other day and saw them in full production mode. With fewer people walking through the doors this time of year, winter is the perfect opportunity to create inventory, but they also recently competed at the Canadian Artisan Spirit Competition in Vancouver. Their 5 Fathom Dark Rum received a gold medal with distinction. If it’s impressing my hometown like that, I’d better check it out myself.

Winter is great and all, but I think of summer housesitting gigs in P. Willy whenever I think of Wayfarers’. Being in walking distance to both The Noodle Guy and the Ale Society makes for many peaceful riverside lunches, appreciating the tide naturally do its thing.

Combine The Noodle Guy’s zippy, creamy shells and sausage with Wayfarers’ Big Muddy Stout, find yourself a quiet piece of riverbank, and give thanks for how lucky you have it.

The Maritime Express Cider Co. always has multiple ciders and 4 craft beers from around the province on tap to satisfy their $8 flights. Combine whatever you put in your sample tray with a corndog. Yes, I said corndog!
This one is housemade with chorizo sausage and paprika honey mustard, courtesy of their new chef, Stephane Levac, whose passion for our Valley is contagious.

Sea Level has kept a smaller version of their Port Pub location as a retail outlet, but now they have a brand new home situated in the middle of their farm. They’re now Nova Scotia’s first estate brewery, using their land to supply most of their brewing needs. Because they get fed every day until the end of March, Where It’s At has been offering Eagle Watch Tours every weekend this winter and one of the stops is at Millstone Harvest, just down the road. You can always count on their Rojo Mojo Red Ale. Plus, it’s fun to say.

I don’t know exactly what a “noggin” of rum would have looked like in the late 1800s, but that’s where the name comes from. Although this circa 1760 original New England Planter apple farm is no longer in the distillery business, they are producing 3 signature ciders with an exciting 4th offering on the way. Honeycrisp Cider is coming soon, according to the Noggins website. Well that just sounds right, doesn’t it? I called asking for a release date, but it’s a mystery. Whenever it is, it’ll draw attention.

In the meantime, I lift this Noggins Raspberry Bramble to a job well done. The research for this article has been exhausting. You’re welcome.