Laughter makes the winter blues disappear, it’s a well-known fact! If you are suffering from the cold, sleety, slushy downtime of the winter, it’s time to put some pep in your step and laugh until you hurt.

Coming off the heels of their comedy Wild Women of Winedale, CentreStage Theatre in Kentville is jumping into another comedy. Don’t Dress for Dinner is a fast-paced, rapid-fire, laugh-fest that’s been keeping its cast and crew in stitches through months of rehearsals. I am proud member of the troupe and it’s been almost too much to handle in the laugh department.

The basic premise: escape for the evening to the French countryside home of Bernard and Jacqueline. Bernard is planning a weekend with his chic Parisian mistress, Suzanne. He has attended to every detail including hiring a gourmet cook (named Suzette), packing his wife Jacqueline off to her mother’s, and inviting his best friend, Robert, to provide his alibi. It’s foolproof! What could possibly go wrong? Suppose Robert shows up not knowing why he has been invited, and he mistakes the cook for the mistress and the mistress for the cook? Mix these ingredients and you have the recipe for an evening of hilarious confusion that will have you laughing until you cry.

Junie Hutchinson, no stranger to being involved in many CentreStage farces, including The Odd Couple, The Game’s Afoot, and Leading Ladies, is the director, with Kiki Cliff as producer. Vince Fredericks is a welcome addition to the crew doing the lights and sound, and Karen Court and Delores Gaudet are the stage managers for this production.

And now let’s chat about the incredible cast. In spring 2014, Quick As A Wink Theatre, Windsor (under the direction of Junie) staged this play to positive reviews and great crowds, bringing a cast of local actors together who easily became fast friends and forever theatre colleagues. So, if it’s not broke, don’t fix it! This production, under Junie’s direction, reunites not one but FIVE of the original six actors from the 2014 production, and it’s been a reunion like nothing else. The cast includes Paul Abela, Linda Levy Fisk, myself (Mike Butler), Jane Kerr, Alan Tupper, and new addition Tracy Churchill, who dove in and made the role her own. If the rehearsals are any indication of the play’s hilarity, audiences are in for a laugh-a-minute treat! A fun note to mention: both Jane Kerr and I were awarded Quick As A Wink acting awards for our roles, and we can’t wait to bring them back to life for CentreStage.

Don’t Dress for Dinner is playing evenings on February 28, 29, March 6, 7, 13, 14, 20, 21, 27, 28 with matinee performances on March 8 and March 22. Front of House opens at 6:45 pm for the evening performances and 1:15 pm for the matinees. Tickets are adults $15; seniors/students $12; children, age 12 and under, $5. This play does have some mature subject matter. CentreStage takes cash or cheques only. Reservations are strongly recommended and are held until 15 minutes before show time. You can call 902-678-8040 for reservations. Please visit centrestagetheatre.ca to find out about upcoming shows, auditions, and special events happening at the little theatre with a big heart!

As special treat for this production, the lobby artist wall will feature living art portraits by local artist Jaimie Corbin from Phantom FX. Her work has been dazzling the Valley for years and CentreStage is so pleased to coat the lobby walls with her brilliant pieces. So have a laugh, embrace local theatre and art, and brush off the winter blues with a farce like nothing you’ve seen before! 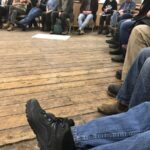