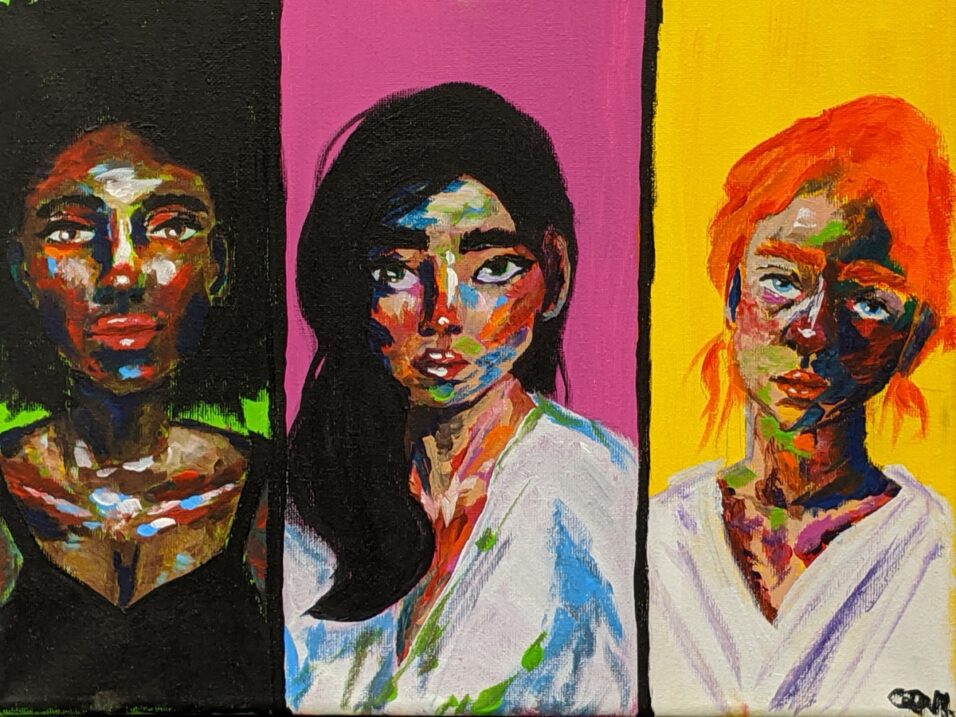 Dramatic colour, skillful drawing, wonderful imagination, and brave interpretations of a theme. These are qualities that make art stand out, qualities that make us stop and maybe see things through another’s eyes. When the artist is ten or sixteen years old, surprise quickly turns to genuine appreciation. Such was the case on March 3 at a wonderful youth art showcase in the the Lions Hall of the Kings Mutual Century Centre in Berwick (otherwise known as the Apple Dome).

One of the many events this month inspired by International Women’s Day and this year’s theme (“an equal world is an enabled world”), the art show was spearheaded by two local community-minded ladies, Lindsay MacDonald and Kim Stewart. Stewart heads the Lion Club’s New Voices Leadership Initiative, which works with women, youth, and other under-represented groups around the province. MacDonald works for Edward Jones in Kentville, but still finds time for community projects. When MacDonald first thought of the art show concept last year in June, Stewart was quick to jump onboard, and together they set out to make it happen.

Their idea was to do something with youth to introduce and discuss the role of women today and the issue of gender equality. They targeted Windsor to Digby, and Stewart made it her mission to visit each of the region’s schools, promoting the art show to students between the ages of ten and eighteen. That age limit soon changed due to the response from even younger children. Then they reached out to the Girl Guides, the Kentville Library, and NOVA Seven Makers Space in Greenwood. The hope was for at least fifty submissions of any type of visual art with the end goal of attracting a multi-generational audience engaged in a conversation about gender equality as interpreted by the young artists.

The submissions of art started to arrive, and MacDonald was immediately impressed, “(The youth) have a deeper understanding than I could have imagined. I was absolutely amazed by the talent and how thoughtful and passionate they were. It was very inspiring.” Stewart adds, “I learned what a passion the youth have to create and how they need an outlet to show their work.” Many of the young artists normally make art in isolation and this opportunity to show their work with their peers gave them new-found confidence and encouragement. MacDonald explains, “We intentionally did not give out any awards. Art is so personal. It was more important that every young artist felt proud and accomplished.”

On opening night, the room quickly filled with proud parents and an admiring public who took time to explore all the artwork and meet many of the young artists present. Samantha Usjak, a thirteen-year-old student from Middleton Regional High School, was kind enough to discuss her lovely painting entitled “Horse Power.” Fourteen-year-old Danielle Wezenbeck, who has only recently begun painting lessons through NOVA Seven, posed for a photo with her bold abstract painting of three women entitled, “Different Yet Equal.” Wezenbeck actually sold her painting that evening, and was very inspired by the other artwork in the show. Another haunting drawing that drew attention was entitled “Faces of Change” by fellow NOVA Seven artist, nine-year-old Amelia Penner. The artwork was varied and truly impressive, and each of the young artists are to be commended for their imagination and creativity.

MacDonald and Stewart are determined to continue this annual event in conjunction with International Women’s Day. They both expressed their sincere gratitude to the students, their parents, the art teachers and schools, the Berwick Lions Hall, and the many others who supported the art show. Special thanks also goes to local artist and venue sponsor Betsey Harwood. Details for next year will be finalized by this fall, and anyone interested should email lindsaymacdonald1@hotmail.com. 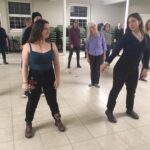