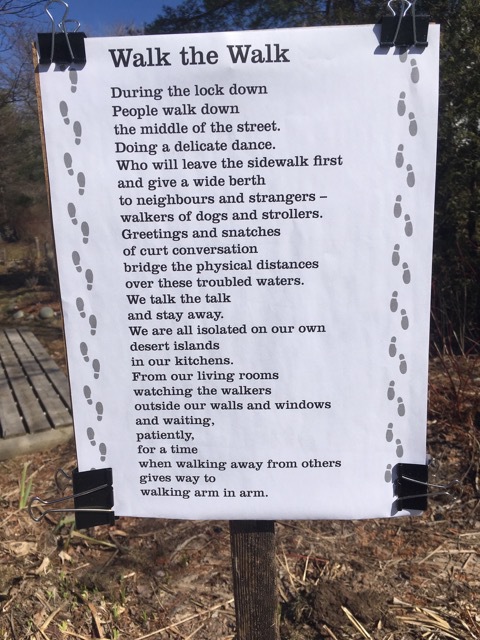 There was a general burst of creativity after we all got locked up mid-March. Music especially flourished, but so did poetry. In Wolfville, Elisabeth Kosters decided to share poems. She posted a Daily Poem for Strange Times for 50 days running, starting March 28. The last work to be hand-lettered and nailed to a wooden box on Kosters’ Main Street lawn was “History will remember” by Donna Ashford. It was submitted by her friend and neighbour Lisa Mckenzie.

Lots of folks, near and far, got involved in the poetry project. Kosters, who is a geologist by training, was glad of the help from came from the Twitter and Facebook world. She had one neighbour who wrote her a satiric poem. Original works came from Tracy Webb, Ed Thomason, and in mid-May there was a contribution of three canine Haiku.

The box only fit 18 lines, so that was one limitation. Passersby left painted rocks and anonymous lines of verse. Among them were lines from Sheree Fitch, George Elliott Clarke, James Baldwin, John O’Donahue, Rita Joe, Wendell Berry and the Rig Veda. The carnage in Portapique prompted others. The poetry wall began as diversion, but became full of meaning. They were posted every day through lots of rain and a couple of snowfalls, during what Kosters called “never ending non-spring.” The 50 days gave her and others time to ponder the words and discover new poets. She has made a PDF collection of the poems for contributors.

Sending her an e.e. cummings poem segued into a chat with Kate Woods from The Advertiser. We got thinking about the value of poetry and that’s how the poetry ‘branch plant’ came to Kent Avenue. Emily Leeson’s outdoor heart of Christmas lights started a trend as hearts of various materials spread up and down the street, and that was inspiring. Under the order to shelter in place, we began writing poetry and posting it on a makeshift sign stand at our driveway entrance.

We sent our friend Robert Rose, a poet at heart, the second of what we are calling our ‘isolation poems,’ “Walk the Walk.” He responded, “your poem is a weapon loaded with the future.” Then he added a quote: “All perishes, only poetry remains,” from Nguyen Chi Thien. Robert also shared a favourite Michael Harnett poem “A Necklace of Wrens.” Steve’s book club on Zoom watched a video of the Irish poet reading his poem and talking about it. Members of a book group meeting on Zoom recalled and recited memorable poems. Hearing Yeats and other romantics prompted a look at various forms of poetry, like sonnets and ballads.

We’ve shared poems on such subjects as time, isolation, birds, weeds, and dog companions. Once polished, they’re laser-printed, wrapped in clear plastic and posted on the sidewalk. With so many out walking these quarantined days we have learned we have an audience of return passersby. It’s unexpectedly become creative, socially-distant fun! 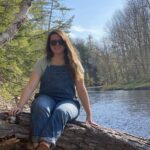 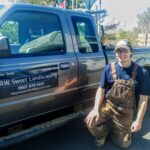