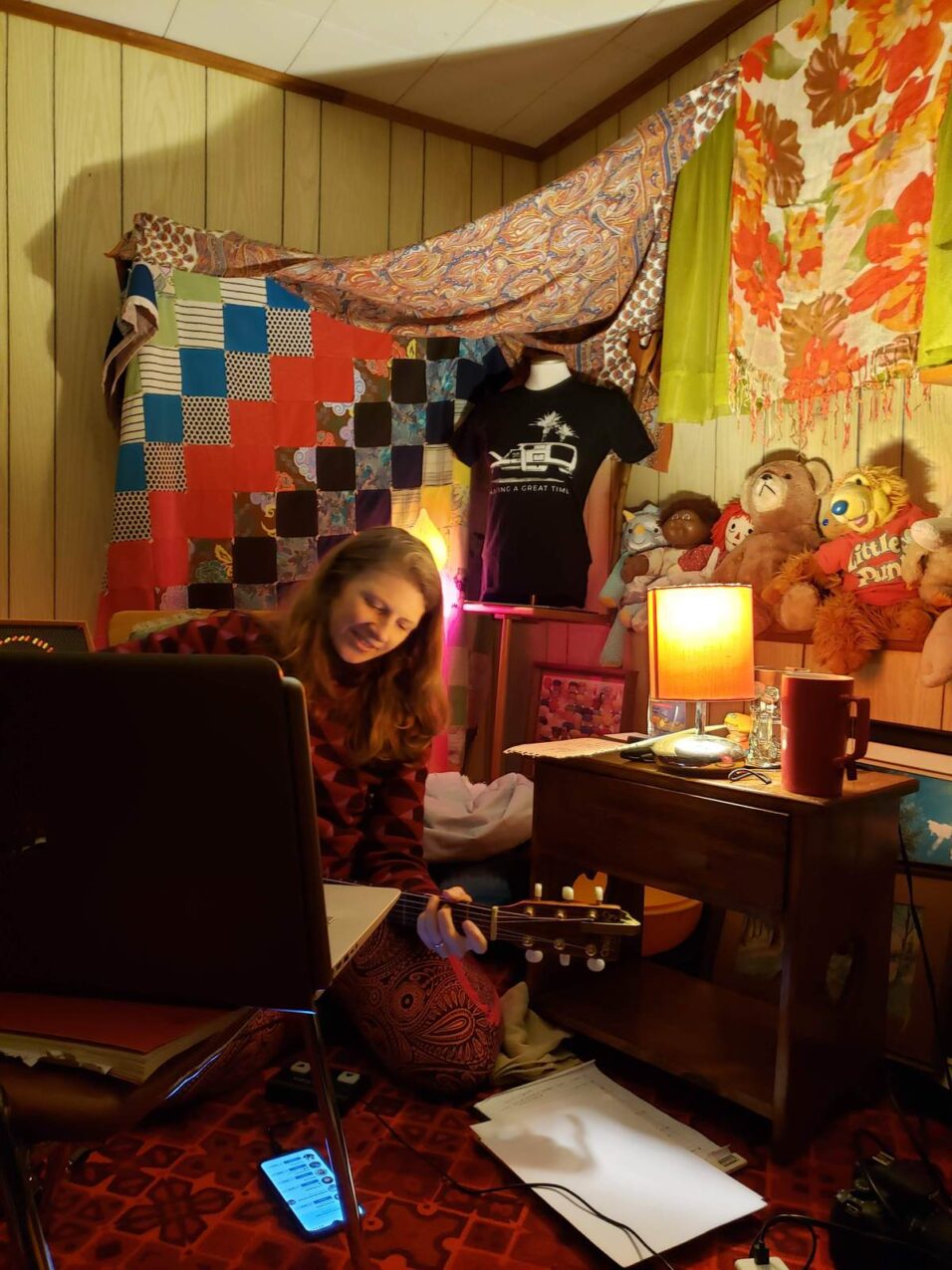 It’s no secret that the last few months have been especially challenging for musicians. We caught up with a selection of talented Valley players to find out how they’ve been making their music during a time when shows have been limited and touring has been impossible, and to share their plans for the future with our readers. We are so lucky to have so many amazing folks making music in this Valley.

The Basin Brothers
The Basin Brothers have been working on a new album with Thomas Stajcer at the New Scotland Yard studio in Dartmouth (shown here), a follow-up to their 2017 Country Paranoid release. The new album should be ready for release as a send off to 2020. Their annual North Along the Shore Jamboree was cancelled this year, but they are hopeful for its return in 2021. For more information visit thebasinbrothers.com

Sarah McInnis
“This summer has been a strange one, especially when I look back at last year when myself and so many of my musician friends were playing shows here, there, and everywhere. While it has been a quiet summer in terms of performing, the shows I have taken part in have reminded me of the resiliency of the music community. I took part in a couple of online concerts, facilitated respectively by songwriters Ellen Torrie, Kristen Martell, and Darrel Cameron. I also had the chance to play what would be my only in-person gig through Kim Barlow’s Kitchen Party Series, where I was able to accompany Chris Robison on a few of his tunes; these shows also allowed for some fun jams with fellow musicians and community members alike. I think music is like water in a lot of ways—it will find a way through any stone wall that stands in its way. Thank you to the organizers and musicians that made music happen this summer. Music will always exist when people gather, create, and collaborate. There is power there.”

The Gilberts
“The Gilberts were set to enter the studio to record a debut album in March but Covid caused us to pivot and decide to record the album at home. We had quite a lot of media coverage, including on Global News. We pushed ahead with the album, titled Tell Me, and it’s set for release November 2020! The first single ‘Not Always’ is out now. It’s a song offering hope in these challenging times. You can hear it and download it for free at our website thegilbertsband.com. It has been warmly received and featured on NPR syndicated stations in the United States. We were also pleased to be featured in the Deep Roots 2020 Covid Concerts series, and to perform at a Full Circle event at the Avondale Sky Winery.”

Heather Kelday
“Wonderful to be part of such a supportive musical community here in the Valley. I enjoyed playing a few virtual concerts, one with the Deep Roots Music Co-op, and some special outdoor concerts hosted by Music In Communities, spearheaded by Kim Barlow. Looking forward to shows at Avondale Sky with Full Circle Festival and a community campfire with Kentville Recreation later in September. I have always LOVED playing outdoors so this is my kind of jam! I hope we can continue to find ways of being together and sharing music.”

Maxwellton
Maxwellton, a local cover band playing everything from Jenn Grant to Bahamas, had plans to gig around the Valley and Halifax this spring and summer. As gigs started to become few and far between due to the pandemic, virtual online shows and outdoor performances became the band’s main musical outlet. Trying to remain musically active, Maxwellton kicked off sharing their music at a distance by visiting a good friend and serenading him from his driveway, to then delivering a ‘Happy Birthday’ telegram to a grandmother from her granddaughter. They were honoured to put together a video for the Deep Roots Virtual Concert Series, featuring incredible artists, both locally and from away. The Acadian Festival in Clare also invited Maxwellton to take part in a virtual online series, that featured artists on a Facebook live during lunch hour. Kingsport Kitchen parties that took place outside were a welcome introduction back to the live music scene, and Christiane and Melissa have currently been busy singing backup vocals in studio for local artists putting together projects. The group looks forward to pursuing their musical endeavors as solo artists, each writing and creating their own music. They will continue to play shows as Maxwellton at local venues, and look forward to when music can be shared together once again!

Kim Lake
“I spent the spring shifting the gears of Full Circle Festival to move it online for its annual June festivities. I’m currently organizing a series of musicians to perform at Avondale Sky Winery during the month of September as a continuation of Full Circle’s efforts to support local music. I’ve also spent this time working on my own material, writing new songs and recording my debut full-length album, which will be released later this year.”

Kim Barlow
“This a picture of me playing at the Canning Kitchen Party Finale, with Mohammad Sahraei. It was the first time playing live with Mohammad since our tour got cut short in March. We performed with Rae Spoon in Yukon and Alberta and were supposed to go on to Ontario and Quebec but we came home instead. In March, April, and May, I home-schooled my kids and played nothing but classical guitar etudes to soothe my worried mind. In June, I got new energy and started salvaging my plans for the Canning Kitchen Party, putting all the shows outside in spaces where it was easy to keep physical distance and fresh air flowing. We put on thirteen shows, with twenty-six different musicians/groups, and audiences got a chance to hear live music again for the first time in months, and even dance! We had jam sessions after many of the shows. Hearing people sing together again was one of the best things ever. Now that the series is done, I’m taking a breather and looking forward to focusing on writing and practicing. I’m also excited to announce I just received a grant from Canada Council for the Arts to host improvised music events. The Music In Communities Co-op will also run youth music workshops. I’m determined to find safe ways to keep music in our community this winter, for our mental health and happiness.”

Ken Shorley and Sahara Jane
“Ken Shorley and I returned home from India in mid-March to find out that our Canadian tour had to be cancelled due to COVID-19. So we settled into our A-frame studio home, took long walks, and connected with the nature around us. Eventually, a live performance on CBC’s Mainstreet rebooted our energy, and some amazing organizations locally stepped in to provide places to play and keep the music alive. Special thanks to Kim Barlow from the Canning Kitchen Party, Hal Broland from The Osprey Arts Centre in Shelburne, and Dave Carmichael and the team at Deep Roots Music Festival for keeping us playing this past month. We are so grateful for everyone supporting live music and keeping the joy alive! We feel so blessed to be here in the Valley during this time and are currently working on some recordings and some video projects. You can keep up with our music on youtube.com/saharajane and youtube.com/kenshorley

Cristian Quirivan
“Since March, I’ve been playing music by myself, trying to discover new sounds and getting some progress with new tunes. All this work has been mostly at home, however, I had the opportunity to play at The Canning Kitchen Party and Wolfville Farmers’ Market in August. I had so much fun and it was lovely and pretty much healing to be able to see and play for the community again. I will be filming a 25 minute performance along with Mika Francis, for the Deep Roots Festival. It’s Mi’kmaq music and I will be playing the pipes, woods flutes, and the charango while she is singing and playing the drum.”

Terra Spencer
“Back in March, when quarantine kicked into gear at our house and the music calendar quickly evaporated, I had an impulsive idea to host an online show from our basement. Not a concert, per se, but a fun little time in the spirit of Mr. Dressup meets Tommy Hunter meets late night talk shows. My family (pets included) were the guests on Blanket Fort Tonight, which aired for 15 episodes of songs, games, viewer contests, and Happy Birthday Handwashing.

The extra time at home was spent enjoying my family, cooking up unusually hearty meals, and a new album, Chasing Rabbits, which will make its way into the world in November. I have been so thankful for hardworking people like Kim Barlow of Music In Communities and Peter Mowat Of Deep Roots who have made outdoor summertime shows possible here in the Valley; it is a such a joy to play in person with other musicians again for real live people!

Gina Burgess
“I’m a violinist/fiddler from Windsor NS. Before Covid I was a full-time touring musician with the band The Jerry Cans (based in Iqaluit), and since have settled full-time here in Windsor. Since Covid I have been making little cover videos (my quarantine series), working on orchestrating an operatic piece for small ensemble and voice, as well as finishing my debut solo album, ISNOW, that will be out this fall or winter depending. I’ve also been teaching violin and yoga, gardening, and swimming.”

Jesse Griffith
“Last year, I performed for 90 consecutive days in the camera obscura in Cheverie. An installation, practice, performance, and experience where I explored many themes and subjects as I maintained a blog (wandarian.com/blog-2019) and eventually put out another record (CONCERT OBSCURA 2019). This year, I recorded and mastered an entire album that I chose to shelve, and then rerecorded at the Deep Hollow space, which I’m just finishing mixing to be released shortly. It is a culmination of everything I do and strive towards. The stillness of motion, the labour of love of farm work, improvisation, and composition. I also play in the Basin Bros. and we’re busy finishing up a brand new double album, as well as playing with Kim Lake. I’ve been involved in that record and am incredibly stoked for that to come out soon!” 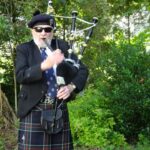 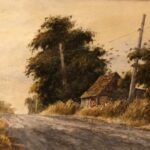