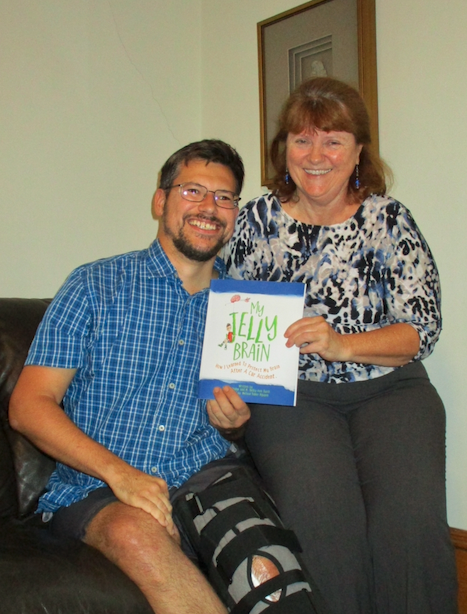 My Jelly Brain Has An Important Message

Wolfville resident Mark Selvidge is a brain injury survivor with a mission. He is the co-author of a children’s book, My Jelly Brain, about brain injury and the importance of inclusion regardless of differences. He and his co-author, counsellor and life coach Betty Ann Buott, are passionate about educating others about brain injury. They have presented to various elementary schools in the Valley and several years ago at a National Brain Injury Conference. The book is a teaching tool.

When talking to school classes about the dangers of brain injuries, Mark usually brings along a couple of melons. Both get dropped from waist height, but only one wears a helmet. The one without the helmet, he says, shows the most damage. After examining the melons, Mark hands out pieces of fruit after explaining that “your brain is the same consistency as a bowl of Jell-O. And if I can prevent one kid from going through a quarter of what I went through, I’d feel like I’d won a million dollars.”

At the age of 10 Mark was injured in a car accident outside Red Deer, Alberta. He spent three months in hospital and had to learn everything over again. There were the physical challenges and also the emotional cost of the bullying he endured. Twenty years later, Mark has graduated in small engine repair at Kingstec and he delights in risky activity with the right safety precautions: zip lining, swimming with sharks, and travelling solo to Australia.

According to Buott, the idea behind the book is to help children understand that they only have one brain. The aim is also to point out that “just because somebody’s different doesn’t mean that they don’t have a worthwhile contribution to make.”

Melissa Baker Nguyen provided the superbly colourful illustrations. She shows a young Mark with his physical disabilities. These days he’s sporting a cast due to a recent bike accident, but is still taking in studies in community development at Acadia University.

*My Jelly Brain is currently in schools throughout the Annapolis Valley as well as local bookstores like The Market and Chisholm’s. Once the pandemic is over, Mark plans to spread the word further. For further information reach out by writing: myjellybrain.book@gmail.com*

Poems: Travelling with my Daughter

John Guiney Yallop cherishes his relationship with his daughter Brittany, so much so that his latest book of poems explores their life. Many were written during travels together – hence the title. His is a thoughtful lovely book. He and his girl go camping, walk beaches, and traverse Newfoundland, the Prairies, and the Netherlands. All these experiences add to his understanding of Brittany.

Guiney Yallop teaches literacy and the creative arts at Acadia’s School of Education. His previous book of poems was called Out of Place. He is working on another about his experience with prostate cancer.

Both My Jelly Brain and Travelling with my Daughter are available direct from the authors or on Amazon. 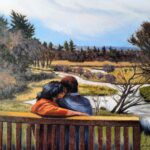