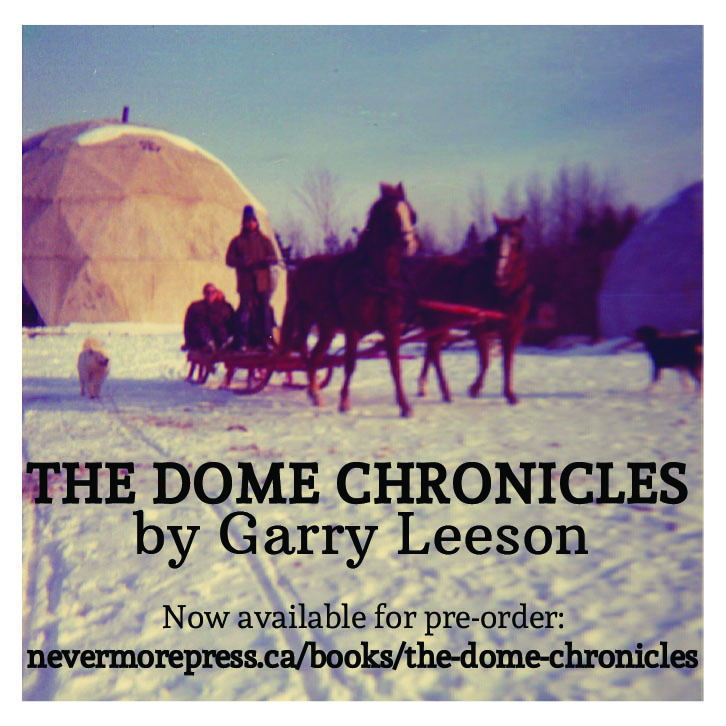 Context: In 1972, a boxcar from Toronto containing a menagerie of farm animals and an eager young couple pulled into the station platform in Kingston, Nova Scotia. They were bound for a deserted hundred-acre farm on the South Mountain, determined to preserve the foundations of farmsteads past while constructing a geodesic dome. They were pioneers of the future, armed with respect for tradition and an irrepressible sense of humour. They didn’t call themselves farmers. They were back-to-the-landers. Farming was industry and their calling was sustainability. Over the next forty years, through flood and fire, triumph and catastrophe, they persevered, unwittingly sowing the seeds for the modern small-farm movement.

By December of 1976 most of our income had to go into materials for the geodesic dome and barn we had been building, and the prospects for Christmas did not look good. It would be a slim Christmas for our two sons, Brenden, age eight, and Timothy, two.

That year I learned about the custom of the city of Halifax sending a huge tree to Boston annually in thanks for the aid that city had provided in the aftermath of the great explosion of 1917. The news on TV about the tree being felled and loaded for the long trip to Boston gave me an idea. We didn’t have much money but one thing we did have lots of was trees: thousands of trees and many of them were soft wood or evergreens – potential Christmas trees!

At the time the term ‘cathedral ceiling’ sounded a little pretentious considering the unfinished state of our home but we did have a good sixteen foot ceiling in our partially finished living room so I decided to go all out for Christmas and give the kids a tree that would be the mother of all Christmas trees.

It seems that everybody has a different idea about the perfect Christmas tree, so cruising our woods for the right one took a lot longer than it would have had I been on my own. Viewed from a distance most of the trees looked good but after they were given the 360° critique by my wife, Andrea, with the help of the two boys, only one special fir tree met with everybody’s approval.

Of course that particular tree was located in the most remote inaccessible spot on our property. I had planned to use my team of horses to yard the tree out but after assessing the narrow twisted route I would have to manage, I settled on singling out my quiet chestnut gelding, Beau, hoping that he would be up to the task on his own.

The next day the old horse stood patiently waiting near the tree while, after several furtive attempts, I finally got my old blue Homelite chainsaw fired up. Of course I had forgotten to sharpen the saw so the procedure was more like gnawing than sawing.

Eventually I did fell the monster and, with a lot of geeing and hawing, Beau and I wound our way out of the woods, skidded through the fields, and landed our prize in front of the huge picture window of the dome.

None of our doors would be big enough to accommodate the tree, but I had thought that problem out in advance — all I had to do was to remove two of the huge triangular Plexiglas picture windows making for about an eight foot hole – it would be a tight squeeze but it seemed possible.

There was just one problem — for now! This was a ton of tree and, even if I were crazy enough to try it, there was no way I could bring Beau into the living room to land it in its final position and there was no way Andrea and I could heave it in.

The horse was still standing in front of the house when inspiration struck — I could still use the horse. I ran out to the barn and retrieved my trusty wooden pulley and rope that I used in the hayloft and brought it into the living room. I secured the pulley to the big stone fireplace located on the far side of the living room and threaded the rope through it, out the window and over to Beau.

As the horse leaned into his collar and moved forward there was a terrifying chorus of crashing and snapping until Beau stopped — he was at the end of his tether and the butt of the tree was hard against the fireplace — more or less where I wanted it to be. A few of the lower branches had been broken off but nothing that a bit of twine and tape couldn’t fix.

After putting together a large tree stand and fixing it to the base of the tree everything was in readiness. That’s when Andrea intervened with a sensible suggestion, “It would be almost impossible to get the decorations up to the very top so let’s decorate it before we put it up.”

“That’s exactly what I was thinking” I replied, looking off into the distance. So that’s what we did. Then with Christmas carols blasting out, the tree ablaze with coloured lights, I began to hoist the tree into position with the help of my trusty cable come-along. Andrea, Brenden, and Tim stood watching with total amazement. Hallelujah!

Then Andrea remembered one more box of decorations up in the attic, so I headed on up to hunt for those last trinkets. There was only the light from the second floor bedroom to go by up there and I hadn’t installed the floorboards either so I had to make my way carefully across the space, stepping from rafter to rafter. Then it happened — Gene Autry had just begun singing “Hear Comes Santa Claus” when I slipped and my foot, with its shiny black rubber boot, went crashing down through the ceiling above the tree.

I heard Andrea’s terrified gasps as portions of plaster crashed to the floor, and then Tim’s excited little voice asking, “Is that Santa up there?? Did he come early?” 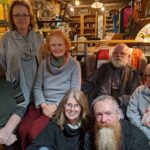