It’s no secret that every food service business in Nova Scotia was affected during the pandemic, resulting in service changes or shut downs across the province. While many are struggling to adapt and keep afloat, one small business in Windsor is putting its energy elsewhere. Schoolhouse Brewery, a microbrewery and taproom in downtown Windsor, is committed to helping the most important food service business there is in the area: the Matthew 25 Windsor & District Food Bank.

Despite shutting down its taproom for ten weeks during the first wave, and doing the same again during the second wave, Schoolhouse Brewery Principal Cameron Hartley isn’t spending his time devising ways to make up for lost income. Instead, he’s looking at the broader community and reaching out to provide support where it’s truly needed.

“I’ve been a proud resident in the Windsor area since I purchased my home, originally Falmouth Schoolhouse #9, in 1999. The thing I love most about this tight-knit community is the people, and how everyone is willing to help their neighbours,” Hartley says. “I reached out to the Windsor Food Bank because I see how hard our community has been hit economically by the pandemic. The food banks need support now more than ever to prevent food insecurity for families in Nova Scotia.”

Hartley and his team began brewing a dark imperial stout as the first beer in what Hartley hopes to be a series of brews that support local community organizations. The first, the Community Stout, will be sold in cans and on tap in the Schoolhouse Brewery taproom, with 100 percent of proceeds going directly to the Matthew 25 Windsor & District Food Bank.

Matthew 25 Windsor & District Food Bank was founded 45 years ago by Dorothy LeGoffice and Cindy Loane in their family home. “When we started the food bank, we were told that it would only be a necessity in Windsor for two years. That was 45 years ago, and here we are,” Loane says. “Today the dedicated staff at the food bank provides food and donates clothing to more than 300 Hants West families per month. We’re so grateful for the support of our broader community, especially considering so many have been affected by the pandemic and are still reaching out to see how they can help.”

Community Stout is available now at the Schoolhouse Brewery store at 40 Water Street in Windsor. The taproom re-opened for food service on February 24. Hartley hopes that everyone who visits will make a point to order or purchase a Community Stout to support such a necessary organization in Windsor. 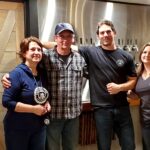 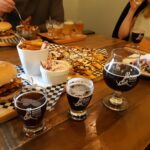