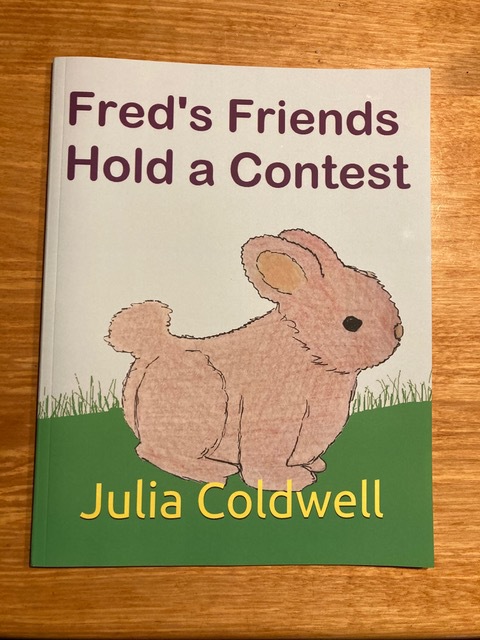 Julia Coldwell is the author of a novel, Stolen Lives, a children’s book, Fred’s Friends Hold a Contest, and a poetry collection, Spoken Waves.

A collection of free verse poems, Spoken Waves offers an exploration of words, cycles, and relationships. The poems bring together observations of water, light, and dark imagery interspersed with playful use of language. They draw on life experiences in Nova Scotia with a stir of creativity.

Stolen Lives is about a young teen named Tessa. At the outset, she and her family are recovering from a devastating fire. Tessa grows in strength, acting to defend her sister and reunite her family.

Julia’s children’s book is a delightful little story about Fred the pink bunny and how his friends show they care about his welfare. Fred might be different from other bunnies, but he has two best friends who help him see that his own special talents are important. There’s a great lesson.

Julia graduated from Acadia University with a Bachelor of Arts in English, minoring in women and gender studies. She resides locally with her family. With her strong interest in creative writing, she says she has been developing stories since childhood, learning to hone her skills in school and at home with practice. In recent years, she has had seven poems published in an online journal, in The Athenaeum, the Acadia student newspaper, and finally in Estuary, Acadia’s Creative Arts Magazine.

Julia self-published her first three works on Amazon.ca in both ebook and print formats with her own cover illustrations. She also began a writing blog last year called May Rose Well.

Walk into The Market on Main Street in Wolfville and you can see directly that there’s a tidy display of slim books of poetry by Jeremy Lutes. A perfect vantage point for a poet born and raised in Wolfville. There are four small volumes to choose from, including Notes From the Black Book, Across the Hall They Are Restless, and Then They Left the City. The latest, from 2019, is called Regal, like the gorgeous bird that adorns the cover.

An entrepreneur with an environmental focus, Jeremy calls writing an outlet to share his personal ideas. He’s been polishing poems for well over a decade. Included in Regal are poems about fresh snow, dating apps, and a touching elegy to the late singer Gord Downie.

Jeremy’s working on live shows for 2021. In recent months he’s offered readings at the Union Street Cafe in Berwick with Garret Mason and online with Wes Booth and Daniel McFadyen. More to come!