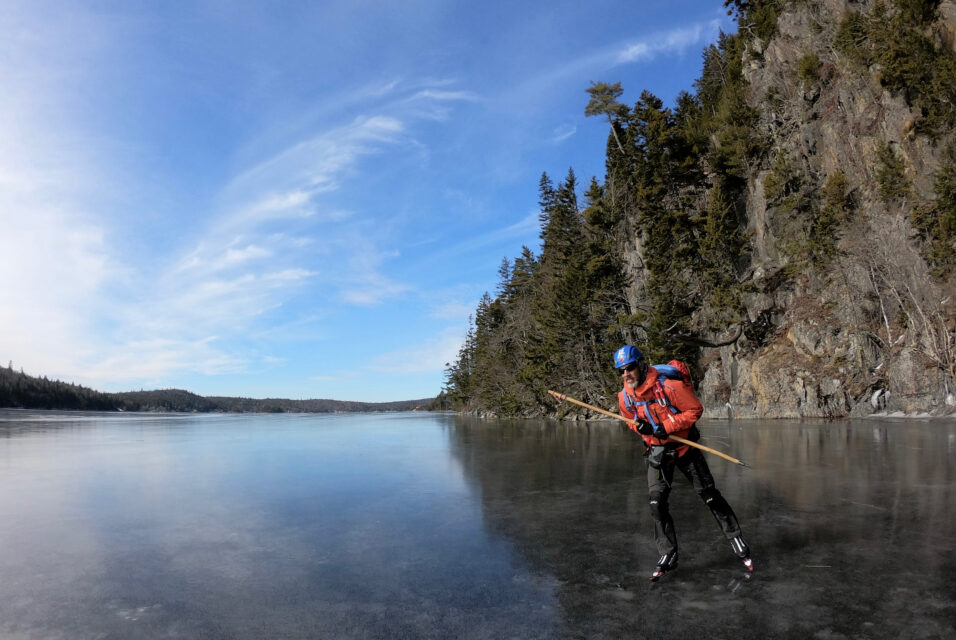 Our winters are definitely changing. Drastic temperature fluctuations throughout the season have made it increasingly challenging to plan ahead for winter adventures, and it is rare that good snow or ice conditions last for more than a few days. Luckily, you usually don’t have to wait very long before the next window of great conditions returns. Nordic skates, kicksleds, fat bikes, skis, and snowshoes are all useful tools to have ready in your quiver. For those prepared with the right equipment and knowledge of conditions, winters are filled with opportunities for incredible adventures in frozen landscapes! And so, each winter our lakes freeze over. Natural ice is inherently elusive and not without risks, but good natural ice skating conditions have become increasingly predictable. From mid-December to the end of March there is usually skateable ice somewhere in the province as weather patterns vary greatly from region to region. If not, just wait a couple of days (it is Nova Scotia after all), and patience is rewarded.

The 2020-21 ice season in Nova Scotia was slow to start with minimal ice forming on lakes until mid January. The early freezing northern lake ice became stable by late January and then was blanketed in snow. However, temperatures stayed cold through February with many lakes along the later-freezing South Shore and then Eastern Shore freezing up after significant snowfalls. The slight differences in each region meant that throughout the winter there was always snow-free ice to be found somewhere in the province. Several significant skating tours were carried out this year including: early season ice in the Tantramar Marsh and Jolicure Lakes (NB), multiple trips to the massive Lake Rossignol (Nova Scotia’s largest freshwater lake), and exotic conditions on the rugged Long Lake (Upper Uniacke). There were notable tours to the remote Tangier Grand Lake and Big LaHave Lake (likely skated for the first time), to beautiful ice on Lake Charlotte on the Eastern Shore in late February, as well as groups converging on Five Mile Lake and Panuke Lake for some super ice conditions in early March. Gaspereau Lake saw tons of ice activity throughout the year as the most popular destination. Great conditions allowed several long tours to surpass 70kms. Plenty of communities reported enjoying artificial and shovelled-off ice across the province, notably the Wolfville Reservoir which has seen increasing community involvement in maintaining an accessible outdoor ice skating venue. Once the spring sun and warmth came by the second week of March it quickly melted out lakes in the south. By the end of March, the last remaining ice gave way to spring. Each ice season serves up a palette of winter vistas, mesmerizing ice formations and patterns, and low-impact human- powered adventures in nature. The feeling of gliding frictionless on an expanse of natural ice provides both an exhilarating and meditative outdoor experience.

To fully and safely explore natural ice it is crucial to follow practices developed in the Scandinavian sport of long distance skating (also known as Nordic skating or wild ice skating here in North America). This includes preparation for I.C.E (Information, Company, and Equipment). Information involves finding out about current ice conditions and learning how to assess ice quality to ensure safe ice travel. Company is connecting with other people to always travel in prepared and knowledgeable groups for both fun and safety. Equipment is the specialized skates and safety equipment used to travel efficiently, and give you the knowledge and preparation to manage the risks of falling on or through the ice.

Our Nor’Easter Natural Ice group (NNI) operates across Nova Scotia and works with developing a safe and connected community of natural ice enthusiasts. We organize events and ice safety workshops each year, and continue to build a growing network of online information sharing and ice observations, as well as connecting people and equipment to access natural ice safely throughout the winter. A huge THANK YOU to all current NNI members for your involvement and contributions to our growth! Check out noreaster.ca for more information, join our Facebook and Google groups, and get yourself ready for next season when the temperatures drop. See you on the I.C.E.! 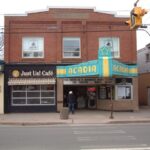 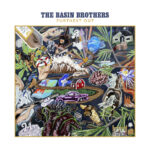