After a year with little to celebrate, Nova Scotian winemakers are popping corks and raising glasses to commemorate the 410th anniversary of the planting of the province’s first vineyard.

In 1611 Louis Hebert, the apothecary at The Habitation in Port Royal, planted a hillside vineyard in Bear River. According to Canadian wine expert Tony Aspler’s book Vintage Canada, Hebert “loaded his canoe with vines he brought with him from France” and paddled to Bear River “to plant himself a vineyard.”

Pairing this historic social aspect of the Order of Good Cheer with the later vineyard planting laid the foundation for over 400 years of subsequent food-and-drink-based celebrations in Nova Scotia.

While it’s assumed the Vikings found grapes in Vinland (something disputed by Helge Ingstad, who with his archaeologist, Anne Stine Ingstad, discovered Lief Erikson’s colony at L’Anse Aux Meadows), and Jacques Cartier found wild grapes growing along the St. Lawrence, Bear River is the first reference to European vines planted in what would become Canada. Bear River’s first vineyard was created 200 years before those planted in Ontario and 248 years before British Columbia, launching the community and province as an original wine region.

The location for this first vineyard appears to have been chosen for the benign microclimate offered by the inland location. The twice-a-day flushing of the Bay of Fundy tides into and out of the Annapolis Basin and upstream to Bear River creates a type of natural heat bank, mitigating extremes in weather and temperature.

The province’s next recorded vineyard was planted in 1633 in Petite Riviere. These early plantings confirm Nova Scotia position as one of the oldest new world wine regions.

In 1963, when federal agricultural scientists wanted to seriously study the potential for a Nova Scotian wine industry, they seemed to take their lead from history, planting a vineyard in Bear River. That experimental vineyard is on the land occupied by the Bear River Vineyards. While none of the 1611 vines exist today, some of the 1963 vines do, and scientists recently determined that vines on a nearby property, where a new vineyard is being planted, are 80 years old. Those vines are so tall only the birds enjoy their harvest.

Now our formal grape and wine research has returned to the vineyards and labs at the Agricultural and Agri-Food Canada Research and Development Centre, a teaching vineyard at the Nova Scotia Community College in Kentville, and a wine research laboratory at Acadia University, Wolfville.

Hanspeter Stutz of Domain de Grand Pre points to these developments and says, “a big difference to the earlier days of our young industry is the support from government, because they see the economic impact, based on huge investments from the different wineries and operators.”

Stutz suggests while “there may still be people who don’t know about our high standard of quality overall for Nova Scotia wines” they should know Nova Scotian wines are from Nova Scotian vines and that the winemaker’s focus is on quality vs quantity. This resurgent sector of “local, high quality wines are a success for our province. Growers and wineries are also important sources for jobs in the province—not only on the agriculture level, also for tourism.”

And it all started in Bear River 410 years ago. This is a commemoration that can be done within pandemic regulations: in your bubble, on a patio, at home, and virtually. 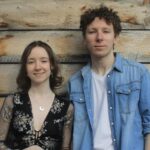