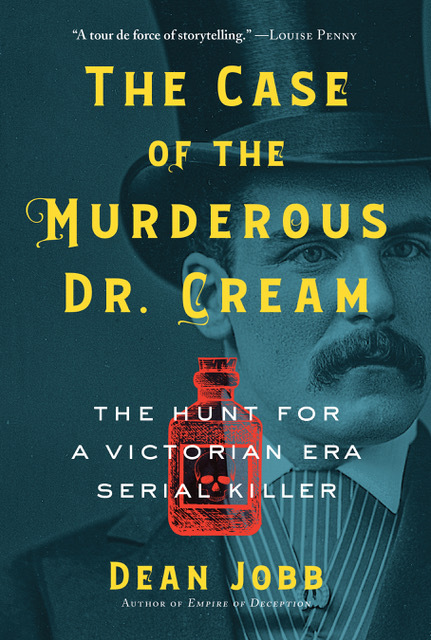 The Case of the Murderous Dr. Cream: The Hunt for a Victorian Era Serial Killer, a new book by Dean Jobb of Wolfville, is flying off the shelves, and no wonder. It’s the kind of book you have to keep reading to the end. True crime is mesmerizing because it really happened. Dean brings all the detail to his storytelling.

Dr. Thomas Neill Cream was a deliberate murderer. Born in Scotland, but raised in Quebec City, Cream was a suspect in the deaths of two Canadian women and likely killed up to four people in Chicago before he was first jailed in Illinois. After an early release, he was off to London, where he started using pills laced with strychnine to kill prostitutes.

Cream became one of the most prolific serial killers in history, and Jobb brings all the innocents and the sinister, shadowy characters to life. The question is how did this McGill medical school graduate get away with his crimes against the innocent for ten years? Why did both the police and the courts fail to bring him to justice over and over again? Finally, Scotland Yard put a spotlight on the murders of the prostitutes of Lambeth. An investigator was sent to the “New World” and a legal battle ensued in London due to Cream’s sideshow as a blackmailer. There is no doubt that Victorian misogyny and hypocrisy allowed Cream extra opportunities to poison vulnerable women. Dean did thorough research on the society that this murderer was part of.

Dean is the author of six books, including two collections of true crime stories drawn from Nova Scotia’s past. His previous books have won awards. His 2015 book, Empire of Deception, is the story of brazen 1920s Chicago con man Leo Koretz and his escape to Nova Scotia. It won the Crime Writers of Canada Arthur Ellis Award for best true crime book and was named the Chicago Writers Association’s Book of the Year. Dean teaches in the Master of Fine Arts in Creative Nonfiction program at the University of King’s College in Halifax. Published by HarperCollins Canada, The Case of the Murderous Dr. Cream was released on June 1.