A Sacred Recital for the Medical Community
Mike Butler

“I Have A Brain Tumour.” I have known and adored Nancy Peck for as many years as I’ve lived in Wolfville. She’s a gem! Recently Nancy reached out with an email that was at first devastating but then filled with great relief and comfort. How I started this article is how Nancy started her email: “I have a brain tumour!”—and thank goodness I’m a rational enough person to read further before resorting to panic.

She explained, “on December 9, 2019 I underwent an 8-hour surgery to remove a benign, non-aggressive brain tumour. Ninety percent was removed with ten percent deemed inoperable. This had been growing for an undefinable length of time, probably forty years. By September 2019, it had become so large it was pushing my essence away. According to the neurosurgeon, Dr. Adrienne Weeks, it was massive and when shown the images in November 2020, there was no sign of “two hemispheres.” One side of the brain was totally compressed, affecting everything.”

In the time I’ve known Nancy, her love of music has always been at the forefront. Her voice and spirit are infectious to those around her. “I had lost my passion for music, singing, playing the piano, teaching, directing the Gentlemen’s Chorus,” he continued, “and leading a monthly hymn-sing at Wickwire Assisted Living in Wolfville. It robbed me of my desire to read, write, design sweaters, create “One-On-Earth” jackets, solve crossword puzzles and cryptoquotes, bake, and garden. I was gone. I needed help walking and getting up from a chair. I was becoming incontinent.”

Despite displaying many symptoms of Parkinson’s disease, when Nancy was examined by Dr. Heather Rigby at the Halifax Infirmary on October 4, the doctor observed: “This is not a classic case of Parkinson’s disease,” and requisitioned a PET scan, CAT scan, and MRI which all took place November 25. For Nancy and her husband Warren, this was the day that changed everything!

“I was immediately admitted,” Nancy says, “and two weeks later I had surgery. On December 21 I was transferred to Valley Regional Hospital to continue my recovery. I remained there, beginning physiotherapy and occupational therapy, until I was admitted to the Nova Scotia Rehabilitation Centre in mid-February. While in Kentville I was transported by ambulance to Halifax for a follow-up consultation with the neurologist, Dr. Rigby, and an EEG. In total, I had eight EHS transports to and from Halifax.”

The bumpy road to recovery continued with seizures (that are now under control) and much more rehabilitation, but Nancy is so thankful for the ‘small miracles’ that turned her ordeal into something to rejoice, because she’s still with us. “While in Kentville,” she continues, “I had a visitor who said my recovery was a miracle. I explained that I was not the miracle. The miracle happened when I was offered a cancellation appointment with the neurologist for October 4, which I accepted. My own appointment was scheduled for much later in 2020. If I hadn’t taken the cancellation date I would not have survived until my scheduled appointment.”

Part of Nancy’s new life consists of setting attainable goals and working through them one at a time. Her major goal is to have a Sacred Recital to support the medical community that supported her through her life-changing ordeal. On Sunday September 12 at 3:00pm, at Wolfville Baptist Church, join Nancy at her Sacred Recital, make a free will offering to support the medical community, and be a part of this very special lady’s way to give back.

“Working with my occupational therapist, Matt Miller, we came up with the idea of designing a workable program to regenerate my energy. I have selected the music (four genres of sacred music: classical, gospel, contemporary, and spiritual), arranged them in a logical order, prepared the music for my accompanist and worked on strengthening my voice. This was all part of the exercise: cognitive and physical skills addressed. Being in large crowds is problematic, hence no reception. I hope to meet you at the door.”

Thank you Nancy for your strength, determination, and for fighting the battle. Mark your calendars for the Sacred Recital everyone! All the best! 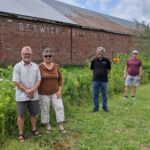