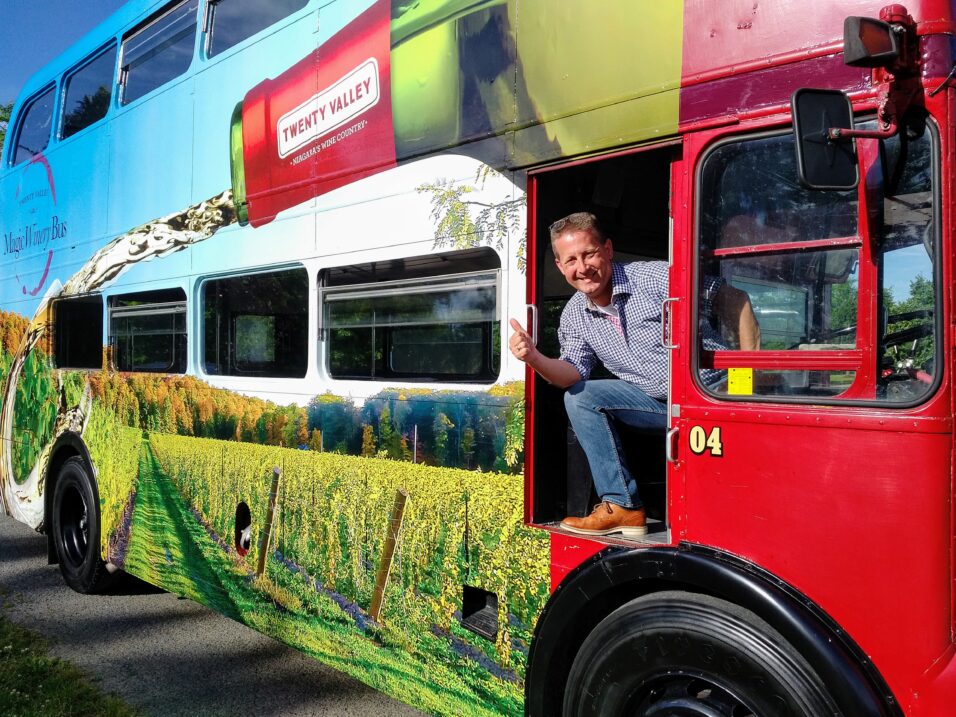 A Little Wine, A Little Magic, and A Big Bus
Mike Butler

David Hovell and I go WAY back! Well, not that WAY back but a while at least! I have been a proud tour guide on the Magic Winery Bus for four of its ten years on the road, and it’s been something I cherish and thank David for all the time. He loves this area as much as I do and David sees potential when there’s nothing in front of him, sees opportunity when it hasn’t even knocked yet, and sees growth when the seed has barely been planted. Not only that, but he values, appreciates, and promotes Wolfville and so many other beautiful areas of our province, and, it’s time he received some Grapevine recognition. I am your guide for today: I am Grapevine Mike and this is your David Hovell Double Decker Tour! Enjoy!

David Hovell characterizes himself as an entrepreneur, agri-business booster, wine tourism enthusiast, and 4-H champion, and those who know him agree, but he’s so much more! David is a life-long resident of Port Williams, the same community where his parents, grandparents, and great-grandparents lived.

David’s Valley roots are quite strong. His father worked at Acadia University, and he, his father, and grandmother are all Acadia alumni. David’s grandfather was the Port Williams postmaster, a part-time farmer, and for some time was also the harbourmaster. His great-grandparents were all farm families in the community.

One thing David and I have in common, besides our winning personalities, is the connection that we were born and stayed here in the Valley. David had the chance to pursue a number of corporate career opportunities outside the Annapolis Valley but knew there was lots of business opportunity close to home. So, he forged his own future.

“Following university, I passionately pursued my dream to be a John Deere farm equipment dealer,” David says. “Through four years of persistence, finding the right business partners, and renovating a business location, on September 15, 1995 Planters Equipment Limited opened outside Kentville. I was one of its founding owners and I was the dealership’s marketing manager. It soon grew to become a thriving dealership, selling more farm tractors than any other dealership in Canada at the time. I later led the establishment of its flagship Halifax store which focused on homeowner and commercial landscaping equipment. After ten years, I sold my interest in the company and it is now known as Green Diamond Equipment with 15 locations and over 300 employees. I take tremendous pride knowing my drive and enthusiasm in the ’90s eventually led to the growth of one of the most successful John Deere dealership groups in Canada!”

David then worked for Nova Scotia Premiers John Hamm and Rodney MacDonald, and in 2011, with a strong background in business, public policy, and not-for-profit governance, he became the first full-time executive director of the Wolfville Business Development Corporation. This is where I come into the picture. I remember seeing and hearing about David in Wolfville and watching great changes happen in the town.

David co-led the rebranding project for the Town which resulted in the logo (“Bloom”) and a brand strategy that the Town still uses today. This branding exercise identified a wonderful economic growth opportunity for Wolfville: to become Atlantic Canada’s premier wine and culinary destination! The tagline, “Wolfville – A cultivated experience for the mind, body and soil,” still rings true today!

David now manages the day-to-day operations and co-owns (with Pete Luckett and Hanspeter Stutz) the well-established, Valley and beyond, famous Magic Winery Bus! Now in its tenth season, the Magic Winery Bus has become an icon in our tourism industry, a specialty excursion that offers wine appreciation, education about our area, and a chance to be part of a unique day trip through Nova Scotia wine country!

“All our industries are connected and it’s working together that builds prosperity,” says David. “The evolution of wine tours is a great example of businesses collaborating. Magic Winery Bus was recognized by the Tourism Association of Nova Scotia with its prestigious Innovator Award and remains a top-ten Nova Scotia experience as declared by Destination Canada. David adds, “It is fair to say that I am rooted in the Annapolis Valley. As a tourism business owner, I aim to deliver exceptional, memorable experiences—experiences that will have visitors return again and tell all their friends about the special place we call home.”

Over the last ten years, David has owned and operated Dockworks Inc. (a cottage and commercial floating dock retailer and installer), and a small property development company, and for a number of years, he was a corporate director of the Kings Mutual Insurance Company, based in Berwick. With so many passions, it’s David’s love of the Valley that still resonates the most.

When asked what he does in his spare time, the answer was similar to something most in the Valley would say: he gives back! David has been an active volunteer locally and nationally. He served on the Annapolis Valley Apple Blossom Festival Board, and is a past chair and board member of the Valley Regional Hospital Foundation, former board and executive member of the Associated Alumni of Acadia University, served on the board of the Annapolis Valley Health Authority, and has been a life-long 4-H champion, to name a few things! “A true favourite pastime for me would be boating,” David said, “but to be honest, there’s nothing more rewarding than being a father. My daughter Taylor is in her grade twelve year at Horton High, is a 4-H Club member and an active all-star cheer competitor. I am her biggest fan and being able to support her and share in her accomplishments is the best experience ever!”

That concludes our David Hovell tour. We hope you enjoyed getting to know this wonderful Valley gent. Don’t forget to tip your guide! Thank you Mister Hovell!

You can visit magicwinerybus.ca for all the tour details as the British Double Decker or Tidal Bay Express tours go to Hallowe’en, and there’s still lots of room for you and your friends, family, and co-workers. Do you believe in Magic? Well, it’s only a click away, so book a tour and make memories for life. You can also email David directly at dhovell@magicwinerybus.ca or call (902) 670–0340!

Pictured: David Hovell on board the Niagara Decker, 2019. Photo courtesy of Mike Butler. 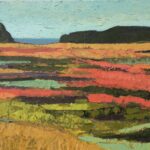