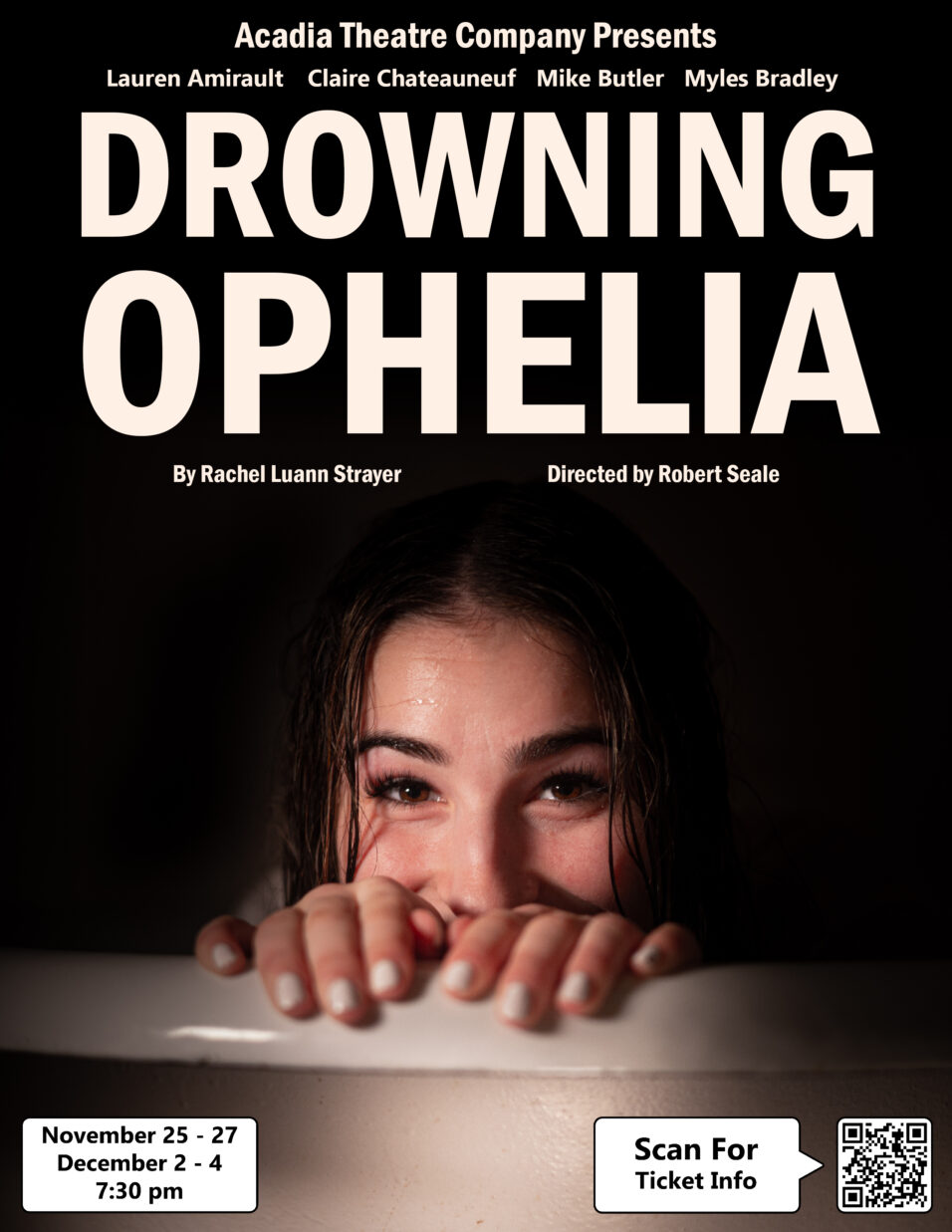 The Acadia Theatre Company is back and ready to welcome audiences again. Their latest effort is a little-known production called Drowning Ophelia, written by Rachel Luann Strayer. The set of this one-act dark comedy is Jane’s bathtub. She finds it inhabited by Ophelia, a strange, Shakespearean woman. Ophelia delights in singing songs about death and valentines, and interrupting Jane’s carefully-planned fantasy research dinners with an actor named Edmund. Jane has a hard time controlling her, especially when her brother Adam appears in memories—memories Jane would apparently rather forget. Although Ophelia lives only in Jane’s mind, she exerts, with her tub, a great and terrible pull over Jane’s consciousness. Ophelia won’t be silenced. Much of the play’s drama derives from the slow unfolding of the mystery of Jane and Adam’s relationship, and the past takes over eventually, enabling Jane and the rest of us to have to finally look at what went wrong, and the cause of Jane’s inability to function. Which begs the question from Jane’s own troubled mind: how do you move on when reconciliation is not an option? There is always hope.

Let’s meet the cast of this buzz-generating production, shall we?

In the role of Ophelia: Lauren Amirault from Liverpool, Nova Scotia. Lauren is in her third year studying community development with a minor in theatre. “I’m taking community development because I’m passionate about community connection and finding ways to better communities,” she says. “I’m taking a minor in theatre because acting is my dream! It’s something I’ve loved to do since a very young age. After graduation, I’m looking to go into either social work or special events planning. Along with that, I would love to keep up my acting on the side.” This very tough role of Ophelia has been a joy for Lauren to tackle and getting to work with a small cast, in an intimate setting, has been both educational and enjoyable for her. Lauren sees each character as unique, and the script is written with a mix of Shakespeare and modern-day language to both challenge and engage the audience.

The last 18 months have been tough on students and well, everyone, but for theatre participants, getting back into the craft has been a rewarding and challenging experience. “The last 18 months have certainly had an effect on my studies and field,” Lauren agrees. “Transitioning to and from online school has been a stressful experience, so I am grateful that we are all able to be together once again. As for the theatre business, it has taken a detrimental hit in the last 18 months. With COVID-19 cancelling productions, it has left many people all over the world unemployed. I am thrilled to finally be performing and seeing live theatre again. A silver lining throughout the last few months has been getting the opportunity to try film acting, which was a very educational experience.”

Up next: Claire Chateauneuf, from Vancouver, BC, is playing Jane. Claire is a fourth-year theatre major with a minor in history. She chose to study theatre and history because she has always found human connections and interactions fascinating: “One of my favourite things about live theatre is the connection it creates among a room full of strangers. That moment during a performance when you become aware of the audience gasping simultaneously at a shocking plot twist or laughing at a funny joke is one of my favourite feelings in the world. I have been involved in many Acadia Theatre productions since my first year. Some highlights include playing Heather Duke in Heathers: The Musical and Petronilla in A Trashcan History of the Crusades. I have also been part of the stage management team for three different Acadia Theatre productions.”

This show has become very special to Claire because if there’s one thing she has learned over her four years at Acadia in this program, it’s that theatre is meant to challenge you. “I am honoured to be involved in our production of Drowning Ophelia because it will definitely challenge the audience and make them question their personal opinions and biases. The play deals with subject matter that I feel is very important, especially as a young woman on a university campus. I am hoping our production will inspire them to start serious conversations amongst their friends and family on what they see on stage and how it translates into real-life events.”

Claire loves being back in full swing at the University, following a tumultuous 18 months juggling Covid restrictions, hybrid classes and very little theatre. She takes great pride in being a part of a show that for most people will be the first live show they’ve seen in over a year.

In the role of Edmund: Myles Bradley, from Digby, Nova Scotia. Myles is a theatre major at Acadia and would love to get into the film industry. His past productions include Tartuffe (2019), Curse of the Starving Class (2020), A Trashcan History of the Crusades (2020), and Uncle Vanya (2021).

When asked why this show was so special, Myles doesn’t hesitate, “I think this show is special because it’s in part about perception as well as coping; how someone perceives another person without context, and how a person copes with certain trauma. I think people should come see it because it brings up a kind of trauma that many people have experienced to some degree, but it also shows the coming-to-terms and how they got to that point.” With Myles being a very creative and hands-on personality, the last 18 months have proven stressful, but that old theatre magic is coming back and Myles can’t wait to see an audience again!

And now, the final cast member of Drowning Ophelia: ME! I am so excited to be returning to the stage as the “old guy helping out the Acadia Theatre Company,” playing the role of Adam. In all seriousness, director and friend Bob Seale asked me to be a part of this production and I couldn’t be more thrilled to join forces with this amazing cast and crew to bring audiences this play. I honestly can’t say enough about the outstanding theatre youth in this production. Come out and see this show and embrace the beauty of live theatre again!

Drowning Ophelia takes places November 24-27 and December 2-4 at 7:30pm. Follow the Acadia Theatre Company on Facebook and keep an eye out soon for ticket info! 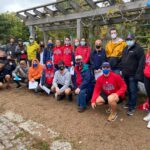