Harvest Gallery is pleased to present George Walford: A Retrospective. We invite you to immerse yourself in works both early and contemporary, sampled from George’s more than four decades in Nova Scotia. Please join us to celebrate his spirit and the indelible mark he has made on the arts in Nova Scotia.

George Walford was a visual artist who first came to Canada in 1969 at the invitation of Mitchell Franklin who met George on the Bayswater Road in London where George, fresh out of art college, was selling his paintings on the wall of Hyde Park. A second visit to Nova Scotia and New Brunswick in 1971 was all that was needed to convince George to move to Canada from his native England. Nova Scotia’s Annapolis Valley was his home ever since. While George concentrated on realism in his early work, capturing Nova Scotia landscapes, he is perhaps best known as an abstract, mixed-media artist.

“The first reaction to Walford’s mixed-media paintings, with their craggy, sandy, pitted surfaces, is physical. You have to grab your hand to stop touching the dried mud of the paint. Then the painting leads you into contemplation. The amazing mixed-media surfaces of collected materials, washes, and glazes are wildly organic …” (Elissa Barnard, Arts Reporter, Chronicle Herald, November, 2008). George created each of his works spontaneously, led by basic intuition and little manipulation, encouraging his work to evolve on its own. Each one a discovery and new fusion of materials. “In continuing his exploration of abstraction away from his earlier landscapes and seascapes, Walford allows you to escape into a space that is quiet and without time,” like George himself.

His work can be found in collections that include: Imperial Oil, Shell Oil, Acadia University, Nova Scotia Art Bank, and the Art Gallery of Nova Scotia. His work is also held in private collections in Spain, England, the United States, and Canada. We thank the many private collectors who enthusiastically loaned works for this exhibition. Many of the contemporary works in this show have not been seen before.

For events and openings, Harvest Gallery will adhere to all recommended health and safety guidelines from Nova Scotia Public Health Authority. To keep our visitors and staff safe, all attendees must be masked and are asked to social distance when possible. Also, all gallery visitors are provincially mandated to show proof of vaccine upon entering. Thank you for your cooperation. 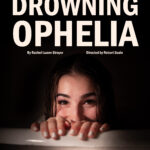 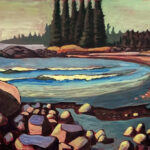