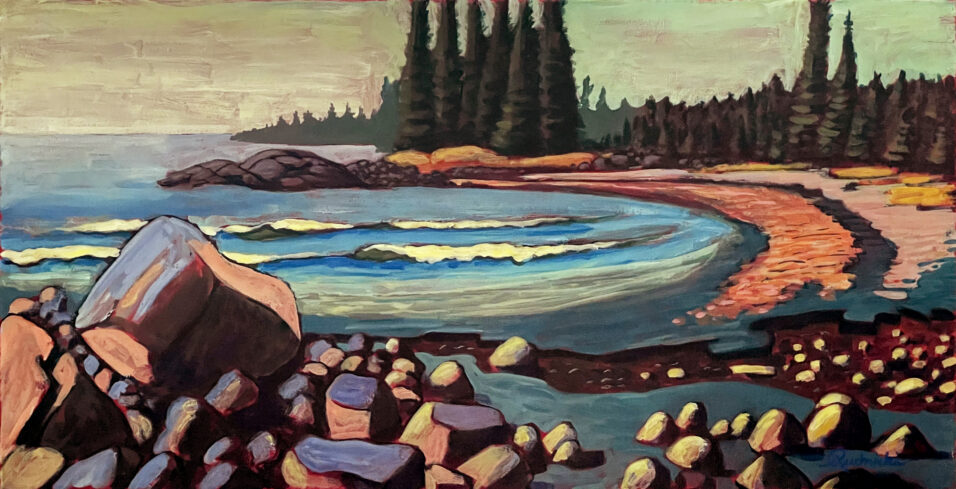 *This is a love story about an artist and his life’s work, his wife and fellow artist, and an exhibition opening on November 6 at ARTSPLACE Gallery in Annapolis Royal. *Richard Rudnicki: Reflections on Life* is an ode to the award-winning painter, illustrator, and author who passed away in 2019.*

*Born in Yorkton, Saskatchewan, Richard Rudnicki grew up in Ottawa receiving his education in both commercial and fine art before establishing a career in graphic design. A move to Nova Scotia eventually led to the decision to sell his design business in 1995 to devote his time to visual art. That devotion was boundless. As an illustrator and children’s author, he won awards and accolades for such titles as *Viola Desmond Won’t be Budged*, *Tecumseh*, and *Cyrus Eaton: Champion for Peace. He became artist-in-residence at the Army Museum at the Halifax Citadel completing, among other things, a mural in tribute to the 75th anniversary of World War II. Richard also organized life-drawing sessions and portrait clubs, and for over ten years he emailed daily memory sketches out to hundreds of fans sharing his insight into the everyday humour and basic goodness of the people around us. At the time of his death, Richard was close to finishing a graphic novel on the HMCS Sackville and he was eager to return to his painting. He loved creating dynamic landscapes endued with his love of nature.

Richard met fellow artist Susan Tooke in 2004 and they married in 2008. Theirs was one of those rare, magical unions later in life made more special by their shared love of art, the environment, social justice, family, and community. In 2018 they left the bustle of Halifax for an expansive country property in Port Royal which they named Long Branch Studios. Here they could both nurture home and creativity nestled on a hillside overlooking one of the most beautiful areas in the Valley. Richard’s passing a year and a half later was tragically unexpected. Honouring her husband’s work as an artist, Susan has thoughtfully and lovingly curated a very special exhibition. The following is our conversation about the artist, the man, and his passion for life.

Anna Horsnell (AH): Am I correct in saying this show is a retrospective of Richard’s career with an emphasis on giving voice to Richard’s life experience, and if so, how does his art speak to life?
Susan Tooke (ST): You are correct. The show will have examples of a number of his varied forms of artistic expression, including painting, plein air, daily sketches, illustrations, the graphic novel, and works on military history. In all of his work, we see his sensitivity to the human condition coming through. As he has said in his artist statement: “I assert a way of life, a way of seeing things, a way of learning, understanding and growing. It’s a way to reach others.”

AH: I read that you chose the work with the help of Ted Lind? What guided your selection process?
ST: Ted was very helpful in guiding me through the process. His 35-year experience working in museums, plus his understanding of the ARTSPLACE, exhibition space were invaluable. Richard was prolific, creating a large body of work. Knowing Richard intimately, and as an artist myself, I chose work that best expressed his core beliefs as an environmentalist and humanitarian.

AH: With respect to background for our readers, Richard was certainly a notable and respected artist. Is there anything you’d care to share about Richard the artist, the man?
ST: Richard was dedicated to his art and took it very seriously, whether it was a simple sketch, or a highly researched mural for the Army Museum. He carried a sketchbook in his pocket and would, when so moved, begin to draw. He loved his family, and was very proud of his daughters Darielle and Tansy, and his grandchildren, Anthony and Sophie. He was kind beyond words and became a surrogate father to my children, Scott, Amy, and Beth. When we moved from Halifax to our farm in Port Royal, he said, “I never thought I would live in the country again.” He was most at home when hiking or biking out in nature, and I have captured many photos of him looking off into the distance, completely taken in by the beauty that surrounded him.

AH: Was there anything that surprised you or anything you learned in reviewing his work to compile this exhibition? What do you hope viewers take from this body of work?
ST: I realized early on that he was remarkably organized—a quality that I do not share! It made things much easier for me. At the same time, I also saw how much of our lives together he captured in his daily sketches. Living with Richard virtually every moment of each day, I accepted everything as ‘normal’. When they are gone, you see the beauty of their life, their spirit, with a clarity unmuddied by the commonplace of everyday life. I would like viewers to see the talent, but more than that, I would like them to see the sensitivity and intensity with which he lived and depicted life.

AH: Is there anything you would like to add or share?
ST: Richard died on November 4, 2019. He died before the pandemic. He died with his graphic novel unfinished and with so much more to contribute. He was working with the Clean Annapolis River Project and installed swallow houses in our field. Each year I see the swallows returning to those boxes in the spring. He was part of the Extinction Rebellion and protested the clearcutting of the forests just days before his death.

*Susan finished Richard’s graphic novel and the book was released this past July. He would be pleased. Richard’s art, humanity, and passionate advocacy have left their mark on this world he loved and Long Branch Studios resonates with the artist’s memory, his long walks on the land, and his way of seeing.
*Richard Rudnicki: Reflections on Life* continues until December 18 at ARTSPLACE Gallery (arcac.ca), 396 St. George Street, Annapolis Royal. Opening reception will be held from 1pm to 2pm on Saturday, November 6th (masks and proof of vaccination are required). For additional information on the artist and his work, please contact susan.d.tooke@gmail.com.* 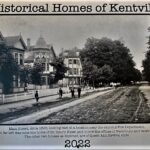