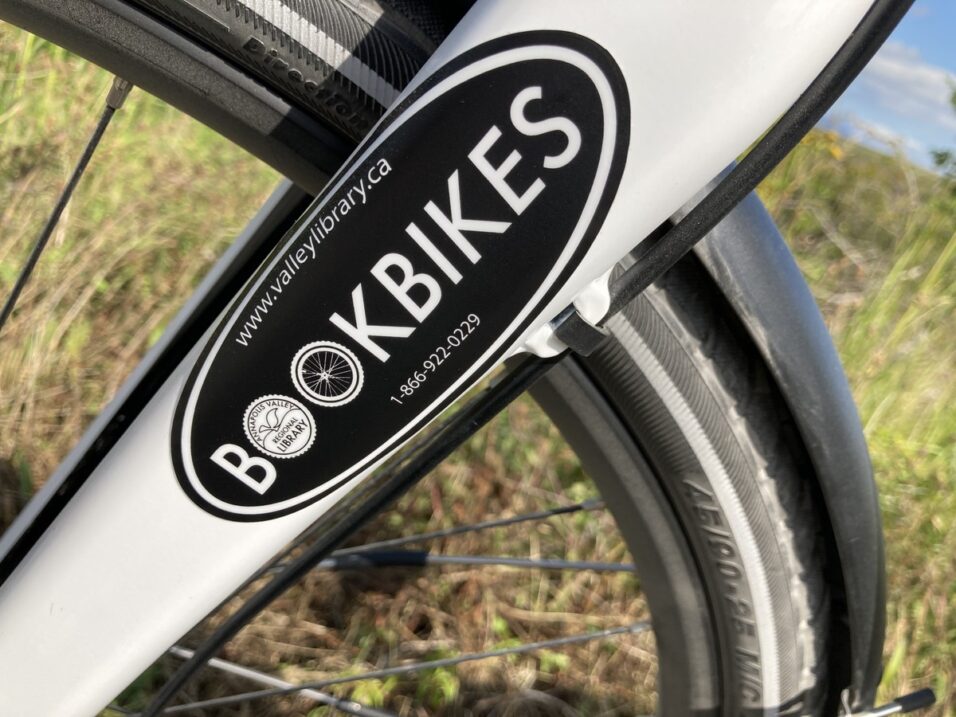 While it may look like the quintessential small-town library, the Wolfville Memorial Library lends out more than (just) books. Since 2017, anyone with a library card has been able to borrow a bicycle for the day to run errands or tour the roads and trails of the Annapolis Valley.

The original BookBike program, launched at the Wolfville, Berwick, and Annapolis Royal branches of the Annapolis Valley Regional Library, included nine bicycles, three at each branch, to improve access and promote more active lifestyles. To connect them to the library’s core mission, each bike was given a cheeky name based on a famous author, such as Chain Austen, Wheeliam Shakespeare, and Edgar Allan Go.

Last year, in an effort to expand the library’s offerings and promote sustainable forms of transportation, three e-bikes were added to the roster. Fittingly, the new bikes were given names inspired by sci-fi authors and books, including Orson “Scoot” Card, Tanya “Huffy,” and 42, the “answer to the ultimate question of life, the universe, and everything” from The Hitchhiker’s Guide to the Galaxy.

While the BookBike program has been popular with library patrons since its inception, the addition of the three e-bikes has given the program an extra jolt, as it were. According to Alice Green, the branch manager of the Wolfville Memorial Library, they’re always the first to go.

“At times,” says Green, “there’s a lineup for them outside the building before we open in the morning.” In the last year, the e-bikes have each been borrowed over 100 times with no mechanical issues.

All three e-bikes are step-through models, making them easy to get off-and-on even for smaller riders, and operate by way of “pedal assist,” allowing riders to achieve impressive speeds and cover long distances with minimal-to-moderate effort. Depending on how much “assist” is selected, their batteries can last between 75 and 150 kilometres per charge, ensuring that patrons never run out of juice while exploring.

“It’s almost like someone is behind you, giving you an extra push,” says Green. “You’re still pedaling, still working, still enjoying the exercise, but it’s not hard work. You can go for longer, make better time, and you don’t sweat as much.”

The only rules are that you must be 19 years of age or older to borrow a bike, and return it 30 minutes before closing time to give staff enough time to put it away and set the battery to charge overnight.

While some patrons borrow the bikes regularly, the program is “mostly about people coming and trying them,” says Green, noting that many residents, and even tourists, have brought an e-bike back at the end of the day vowing to purchase one of their own. Of course, it doesn’t hurt that the number of library cards they issue spikes over the summer,

“It’s been nothing but positive,” she said.

The only wrinkle, perhaps, is that demand is exceeding supply—and not just at the library.

According to Colin Banks, owner of Banks Bikes in Wolfville, public interest in e-bikes has been climbing for a while, with sales increasing steadily in recent years. “We’ve gradually seen an increase in the demand [for e-bikes] as the technology caught up with the needs of riders,” says Banks. “They’re getting lighter, they ride like regular bikes, they look like regular bikes, and reliability is going through the roof.”

However, with the surge in interest in cycling brought on by the pandemic, and programs like Bookbikes allowing more people to discover their benefits, e-bikes have become very nearly impossible to keep in stock: Banks Bike’s entire pre-ordered inventory of e-bikes for 2021 was sold by December of 2020.

“Bikes became the next toilet paper,” he says.

And Colin doesn’t expect demand to decline post-pandemic. North America is undergoing a transportation revolution similar to what has been seen in Europe over the past few decades, he says, with cycling exploding in popularity and e-bikes making up an ever-increasing percentage of bike sales. The pandemic only accelerated this trend, and with current and forecasted shortages, he doesn’t expect supply to catch up to demand until 2023 at the earliest.

For riders considering making the switch to electric, Colin has one note of caution: because e-bikes rack up kilometres more quickly, they tend to require more maintenance than their non-electric counterparts. For this reason, Banks strongly recommends that buyers purchase their e-bikes from local bike shops, which are well-equipped to maintain or repair the brands they sell, but can’t guarantee the quality—or sometimes even service the components—of bikes purchased from online retailers.

All of the bikes Banks carries come with motors from Bosh or Shimano, some of the largest e-bike component manufacturers in the world, and cost in the range of $3,500 each, with batteries that last between 15 and 20 years. The current provincial rebate of $500 towards the purchase of new e-bikes essentially saves buyers the tax.

As to whether e-bikes are the future of cycling, Colin figures it will be more a case of yes/and than either/or. “I don’t think they’ll ever kill the regular bike,” he says, “but I don’t know why any cyclist wouldn’t have an e-bike, too.”

Zack Metcalfe is a freelance journalist, columnist and author active across the Maritimes. 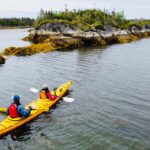