In this book wildlife biologist and ecologist Soren Bondrup-Nielsen reflects on his career as a scientist and on how his experiences as a researcher cultivated a deep sense of connection with nature. Bondrup-Nielsen’s love of the outdoors and adventure drew him to the fieldwork aspects of biological research, taking him to Northern Ontario in pursuit of the elusive boreal owl, to the Lake Superior region to survey birds for a year in what would become Pukaskwa National Park, and to Northern Alberta to study voles (not moles). His research collaborations would later take him to such places as Norway, Finland, Poland, and Russia, where he was always as interested in the people and the culture as he was in his actual study subject.

While structured as a memoir, this book is at heart a meditation on the role of science in society, contemplating issues such as human evolution, the nature of science, human population size, forestry practices, the role of wilderness preserves, the concept of biodiversity, climate change, and the importance of solitude. Like all good teachers, Bondrup-Nielsen is part curious observer and part storyteller, weaving a lesson into his intriguing narrative.

Soren Bondrup-Nielsen will have copies of his new book, Voles, Not Moles, available for sale at Benjamin Bridge Winery on December 4, and ArtCan on December 11 in the afternoon. The book will also be available at the Wolfville Farmers Market Store, and at The Odd Book in Wolfville.

For more about Soren Bondrup-Nielsen and his books, visit bondrup.com 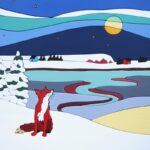