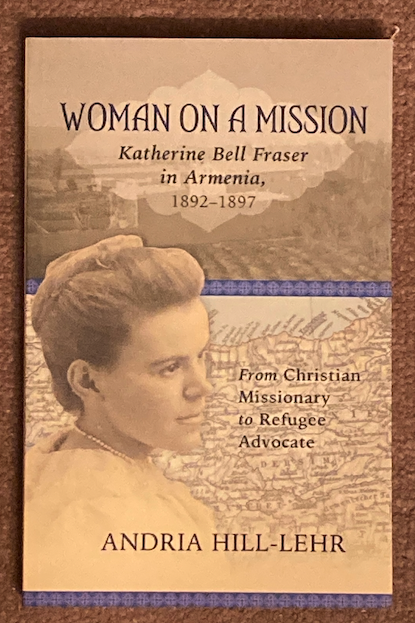 Woman on a Mission: Katherine Bell Fraser in Armenia, 1892-1897: From Christian Missionary to Refugee Advocate by Andria Hill-Lehr

These days it’s common for twenty-something women to seek adventure and life experience through travel. Some people are moved to work in other countries to gain an understanding of other cultures, or to help in humanitarian crises. Katherine Bell Fraser’s reasons for going to Armenia in 1892 weren’t much different. The young woman from Sherbrooke, Nova Scotia, travelled as a young Christian missionary full of zeal, but relatively ignorant of the world and informed by untested ideals.

Within a couple of years she witnessed events that were previously unimaginable—well beyond the poverty and want she was told to expect. Such affronts to her notions of justice and human decency shaped her, and gave her credibility and a voice to speak passionately about crimes against humanity she witnessed. Her story, told with the help of historical photos, diaries, and personal letters, sheds important light on the efforts by missionaries, many of them women, to provide relief and to save lives during the Armenian Massacres of 1892 to 1897.

Wendy Elliott (WE): How did you hear about Katherine’s life story?
Andria Hill-Lehr (AH): One day in 2005, while waiting in the Nova Scotia Archives for a box of research materials, my gaze wandered to the card catalogues lining one wall. In the days before internet search engines and computerized catalogues these were how we looked for information. They offered a serendipitous, tactile opportunity to find something one wasn’t necessarily looking for. At least, that’s how I sometimes used them, rather like when you open a book to a random page to seek guidance or an answer to a question: a bibliophile’s divination. I scanned the labels on the drawer fronts. I can’t now recall whether the label that caught my eye said “biography” or “people,” but whichever it was, it evoked “story.” I slid the drawer open, ran my fingertips lightly along the tops of the cards, and randomly selected one. On it was Katherine Bell Fraser: papers of her missionary work in Armenia, 1892–1897. I recorded the call number in my notebook and returned some weeks later to see what was there. Two small archive boxes containing a few photographs, a journal, and almost two hundred letters drew me into a tale of travel, adventure, hardship, and atrocity, seen through the eyes of a young Nova Scotia woman who went to Armenia as a missionary and then coordinated relief work for nine thousand Armenian refugees in Bulgaria—all before she turned thirty. In this book I quote extensively from Fraser’s papers, letting stand her misspellings, lack of punctuation, and sentence fragments, all of which allow us to hear her voice and get a sense of the person behind this remarkable story.

WE: What about her gumption appealed to you?
AH: My initial interest in her was what moved her to make the choice to move halfway around the world simply on the basis of her untested ideals. I can’t say that I fell in love with her or have become so thoroughly engaged with her as I did Mona Parsons. Mona had privilege but had lived enough not to be naïve about her choices to become involved in risky business during the Nazi occupation, whereas Katherine’s choices were based on thoroughly untested ideals and black-and-white notions of what the world should be.

WE: How did the recent book signing in Sherbrooke, her home town, go?
AH: The signing in Sherbrooke was amazing, both for the opportunity to share her story with those who had never heard of her, and for two encounters with people who had! I was at the Village Treasures Gift Shop. I’d ask people where they were from, and if they said they were the local area, I’d point to the enlarged copy of the book cover and ask whether they knew her story. Two-thirds of the book order was gone in three hours. But the best part was when I saw a couple who had passed my table chatting with one another, and then the fellow made a call on his mobile. Eventually, he and his partner came back to the table. He said that he’d been talking to his cousin, who is a GP in Sherbrooke, asking if he’d heard about the book. Then he told me that he and his cousin are both related to Katherine Bell Fraser. I was stunned! I’d made trips to Sherbrooke in the hopes that someone would know of her—even ‘stalked’ a guy who lives near the Air B&B where I was staying because the surname on his mailbox was Fraser. Nothing. And then this fellow turns up: Sandy MacDonald. The synchronicities that came about because of Mona were numerous and remarkable, but even this little connection was amazing! The other person, who knew of her, identified her when I asked if she was aware of a woman in the Riverview Cemetery with the epitaph “Doing a man’s work with more than a man’s capability.” Her eyes widened and she said, “Why, yes, I know of her. I cleaned her headstone a few years ago, and I wondered what that epitaph meant!”

Katherine Bell Fraser’s story might not captivate or endure in the same way that Mona’s has, but hers is a remarkable story, given the times in which she lived. As we continue to learn just how much women’s stories have been overlooked, or eradicated from history for the last 2000 years, hers is an important piece in the narrative, and it’s wonderful to see how her black-and-white view of the world changes as she moves from her familiar, 19th century Christian Nova Scotia where, as a woman, she is educated but not emancipated, to a country where women are even more inferior to men (e.g. women are not allowed to practice medicine, so are limited to midwifery), and she was a minority Christian working among the minority Christian population.

*Hill-Lehr, who lives in Port George, is published by Nimbus in Halifax. She is the author of two previous non-fiction books: *Mona Parsons: From Privilege to Prison, from Nova Scotia to Nazi Europe* and A Mother’s Road to Kandahar.*

The Pegasus Bridge Show by Michael Bawtree
This story, told in “free-cantering” verse, is a dramatized account of the critical operation to capture Pegasus Bridge by Allied forces in 1944, in the opening stages of D-Day. It is based on an earlier show and DVD presentation by Wolfville’s Michael Bawtree, with original words and music that set the event within the history of previous cross-Channel campaigns. This account draws on the memories of some of those involved and the author’s own experience of serving in the same regiment.

Profits from the sale of this work have always gone to the support of veterans. For this Canadian edition, as an active member of his local Royal Canadian Legion Branch in Wolfville, Bawtree has donated all net proceeds to the Branch’s “75” Fund, which is dedicated to the renovation of the century-old Wolfville Legion building. The renovations will make the building fully wheelchair-accessible and provide new spaces for resources and workshops for veterans. 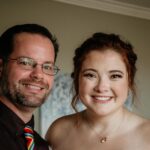