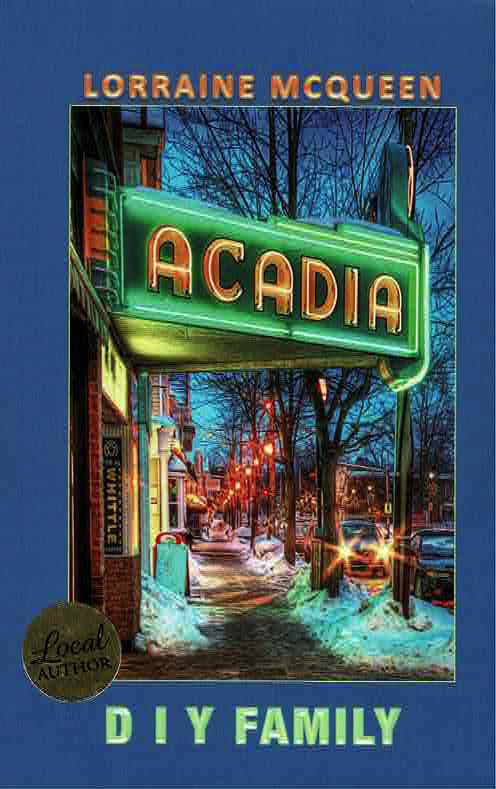 This month we’re featuring three books from WindyWood Publishing of Hubbards. I met editor Patricia Thomas at the Wolfville Farmers’ Market at her booth full of books. She even has stickers denoting “Local Books,” so I had to stop and chat:

The cover of DIY Family by Lorraine McQueen caught my eye right away as it features a sparkly photo of the much-loved and vandalized Acadia Cinema marquee. McQueen’s novel is set in Wolfville and was launched last summer.
Notable for its quirky characters, DIY Family is focused on a young librarian trying to forge a life of her own. Beth is unaware at the outset that she’s hobbled by her well-meaning but strict upbringing. The plot inscribes the arc of her growing self-awareness.

McQueen, who lives in Hantsport, was head librarian at Acadia University in Wolfville, which proves the old adage about writing what you know. Her theme of finding family and happiness in life should resonate. As Thomas suggested this book could be a great beach read or perfect for a cozy fireside.

Gathering In: Covid-19 Silver Linings is a collection that will offer something to every reader about enduring a pandemic. The twenty-six contributors from among this province’s writers, artists, and musicians include theatre artist Kathy France of Wolfville and Alnoor Rajan Talwar from Bridgetown.

Thomas says Talwar is an “amazing person, and brilliant. Housebound but so content with life as he has it.” He offers several different poetic perspectives, including:

At the end of each day, I fall asleep…sinking into the ocean of dreams… With a tear and a smile …yearning and loving …for with Love, comes Hope…

Contributions from Philip Moscovitch about practising Tai Chi with a friend on FaceTime, and well-known writer Dorothy Grant and Deborah Washington’s care of starving pigeons were a special pleasure for me as a reader.

How the Blueberry Got Its Crown is a charming fairy tale written by Suzanne Sheehan from Centre Burlington, Hants County. It is her first book, but I’m told she’s collaborating on another. Sonya Beeler, the illustrator, hails from the Aspotogan Peninsula.

The picture book presents the sweet story of two children out picking blueberries for their mother. They encounter a sorrowful fairy princess who has lost something. Together they locate the prized possession and are rewarded by the little fairy’s mother, the fairy queen herself.

The story is delightful. With the tinted illustrations taken from actual paintings, How the Blueberry Got Its Crown is a slice of life and imagination. Finding hummingbirds, dragonflies, and ladybugs in surprising places just adds to the charm.

Toward the end, Sheehan and Beeler offer five traditional Nova Scotia recipes from their family files. The final page, which was contributed by the Wild Blueberry Growers Association of Nova Scotia, provides background information on blueberry production and harvesting in this province.

WindyWood only publishes Nova Scotia writers and illustrators. Thomas says these books are available at Coles in New Minas and McQueen’s can also be found at Rainbow’s End in Wolfville.