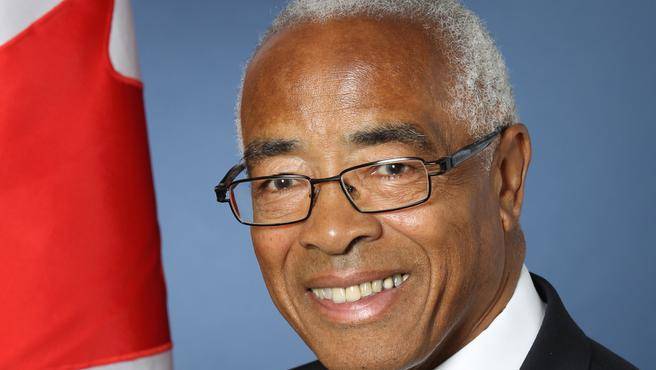 As a privileged white man in the Annapolis Valley, I’ve never had to fight for my rights. I am gay but I’ve never had to fight for those rights; as many fought for me. I check myself every day and remind myself how privileged I am; not to take it for granted or use it negatively but to be a friend to all. I misstep sometimes, but I’m human. I’m trying to be the best human I can be. I believe, today, January 24, 2022, I spoke with the best of the definition of human: The Honourable Dr. Don Oliver.

This Who’s Who is about a Canadian icon of strength, diligence, perseverance, and change. To say it’s an honour to share some paragraphs with you about him is an understatement. The Honourable Dr. Don Oliver is a treasure to our nation and to the world for his work in politics, equality, law, and diversity. The list of his accolades is nothing short of mind-blowing with some of his most rewarding including the Order of Canada, the Order of Nova Scotia, the Canada 150 Medal for Unselfish Service to Community and Country, as well as both Queen Elizabeth II Diamond and Jubilee Medals. His CV, filled with degrees, honourary degrees (from five universities), awards, citations and acknowledgements in politics, law, and civil service, is both inspirational and a testament to Dr. Oliver’s hard work and dedication to making our world a better place.

Dr. Oliver has recently released A Matter of Equality, a memoir which chronicles his journey from being the son of a proud custodian working at Acadia University to socializing with President Barack Obama. This book showcases Dr. Oliver’s personal struggles with diversity and equality and how he turned those struggles into working for change instead of accepting life as it was presented. I am a very proud resident of Wolfville and the Oliver name is famous for its legacy and connection with Acadia University. Just saying The Oliver Family sparks inspiration and praise and a sense that no matter what your background is, greatness and positivity can be obtained.

Dr. Oliver’s connections with Acadia date back over 100 years with his family producing many Acadia graduates, as well as, cherished employees. The Oliver Family has become one of the most distinguished families of the University. As a history buff, and actor on the Valley Ghost Walks, I was fortunate for the past 14 seasons of our Wolfville Walks to be able to tell a bit about the history of Seminary House, which included speaking about William Oliver. William moved to the Annapolis Valley in 1894, took a maintenance job at Acadia and soon was thought of as faculty because of his hard work ethic. William Oliver’s descendants include his son Clifford, grandson William Pearly Oliver, daughter-in-law Helena White (sister of Portia White) who with Clifford produced three daughters (all Acadia alum) and two sons, David who studied at Acadia before moving to Montreal and Donald Oliver (Acadia graduate, and so much more) . If you’re passing by Seminary House on the Acadia campus, there is a beautiful lawn plaque erected to honour the Oliver Family.

I had the pleasure of speaking with Dr. Don Oliver for this article and when asked about his new book: “My target audience is all Canadian people,” Dr. Oliver notes. “This book is to create an inclusive Canada, to build both black and white into a reality, and to break down white privilege. I wanted to paint a realistic picture of growing up black in the 1940s and ’50s, from being the only black family at Wolfville School to what I’ve achieved today.”

While attending Acadia University Dr. Oliver was a member of many campus groups and clubs, including The Athenaeum, where in 1958 he became first the news editor and then the associate editor. After graduating as class valedictorian, Don received the first Sir James Dunn scholarship to attend Dalhousie Law School. He practised law for 36 years and after an encounter with Premier Robert Stanfield, become involved in political life, holding positions at all levels of government with the Conservative Party, and in 1990 was appointed to the Canadian Senate.

And those last few paragraphs barely scratch the surface of accomplishments for Dr. Oliver. His memoir takes the reader on a journey through those politicial years, and the fascinating life of a pioneer for equality and social well-being. I encourage you all to visit donoliver.ca, read through the accomplishments and accolades that he’s received, and stay up-to-date with his writings. Even in retirement, after a career that I could only dream of, he stays active and involved to keep making change happen.

“My book is the start of what I hope will compel readers to push for more equality within our society,” Dr. Oliver continues. “In order to get an equal balance, we both have to do a lot of work. Black and White and all within have to work together.” This book is not just for Canadians of African descent, but for everyone. To read Dr. Oliver’s story is to learn from the life of someone who worked tirelessly for everyone,and it is something very special. You can purchase Dr. Don Oliver’s A Matter of Equality through Nimbus Publishing, nimbus.ca/store/a-matter-of-equality.html, or at local bookstores.

Dr. Don Oliver has easily been the most profound, and most decorated person I’ve interviewed for The Grapevine. Dr. Oliver and his legacy have been teaching me for over 25 years, since I walked onto the Acadia campus and heard of his family. Since those days I’ve been an advocate for my LGBTQ community, had many jobs in customer service, stayed active in world events, and now work in both municipal and federal government. I’d like to take this opportunity to thank Dr. Oliver who, without knowing, influenced my life through his accomplishments and work. I believe in what he believes we all can be. Thank you Dr. Oliver. To know of you, to carry your legacy, and to have had this chance to thank you—that has been my privilege. 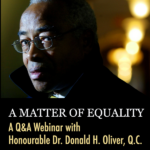 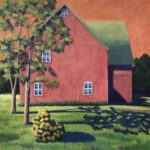