Beyond the Shallow Bank, Nova Scotia author David A. Wimsett’s historical novel with elements of Celtic mythology, won first place in the Magic, Legend and Lore category and third place for Historical Fiction at The BookFest Awards for spring 2022. The awards ceremony took place on 2 April 2022 in Los Angeles as part of the semi-annual conference. The ceremonies and panel discussions were held online this year.

Beyond the Shallow Bank is told through the perspective of an artist named Margaret Talbot who fights her way into the male-dominated world of publishing in the late 19th century to become a magazine illustrator. In 1901, she suffers a life-changing crisis and comes to a small Nova Scotia fishing village where she meets another woman rumoured to be a selkie, a magical being from Celtic mythology who walks on the land as a human and swims in the sea as a seal. With the influence of the villagers, and Margaret’s own self-determination, she strives to discover who she is and what she truly wants.

Publishers Weekly Booklife Prize says, “Wimsett’s novel is quickly paced without the events of the story feeling rushed…Engaging characters and the right amount of fantasy help elevate the novel above standard genre trappings while retaining enough of the conventional elements of historical fiction. Margaret is an engaging protagonist…”

Nova Scotia writer Susan Haley, author of a number of Canadian titles including A Nest of Singing Birds and Petitot says, “The wonderful romantic plot of the book with its magical twist and turns gives substance and resonance to Margaret’s multiple dilemmas. Beyond the Shallow Bank presents a delightful picture of a Nova Scotia fishing village with all its characters: the madman inventor and the man who carries the ashes of his dead wife around with him. Beyond the Shallow Bank contains descriptive passages of the sea which are wonderfully poetic. The writing in this book has both depth and psychological complexity, as well as humour, in the interactions of its large cast of village characters. Perhaps best of all, for the lifelong reader, it is a book to sink into, put down reluctantly, and wonder about long afterwards.”

David. A. Wimsett is a member of the Writers’ Union of Canada, the Canadian Freelance Guild and the Writers’ Federation of Nova Scotia where he sits on the Writers Council. His author’s website is davidawimsett.com 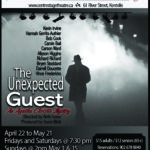