With this being my final Featurepreneur for The Grapevine, I’m excited to offer a fun one for you. The Evangeline Inn and Café got a major revamp and opened its doors to customers again in May. Avram Spatz of Southwest Properties spearheaded the project, and took lengths to keep the spirit of the hotel and dining space alive, while giving it a modern update. The twenty-three room motel is now called The Evangeline, and the restaurant is called Longfellow. Ray Bear, former chef of Studio East in Halifax, is the head chef for Longfellow. Spatz gave me a quick lowdown on the new restaurant.

The Grapevine (GV): What can we expect from Longfellow? What will the menu feature?
Avram Spatz (AS): Longfellow restaurant offers an approachable yet refined menu showcasing the best ingredients the Valley produces. An emphasis has been placed on making everything we can in-house. Dinner is coming soon, but breakfast and lunch is now open Wednesday to Sunday 8am-2pm, and feature classics like Eggs Benedict as well as exciting takes like local smoked salmon with crispy potato latkes, sour cream, and a poached egg. At lunch, our chowder is a real standout, featuring great depth of flavour without being too heavy, and served with a fresh-baked biscuit. You can’t go wrong with a lobster roll or fried chicken sandwich. At the same time, we offer healthy bowls like our roasted cauliflower buckwheat tabouli with beet hummus and dukkah dressing.

GV: How does it tie in with the neighbouring Grand-Pré UNESCO world heritage site?
AS: We think the restaurant is extremely tied into the place and the landscape of Grand-Pré. The restaurant takes its name from the famous poet Henry Wadsworth Longfellow, writer of the epic poem Evangeline, which speaks directly to Grand-Pré’s history. The walls of the restaurant are filled with old photographs of Grand-Pré, Evangeline Beach, and various patrons of the old cafe. The restaurant also provides beautiful views of our garden and Domaine de Grand-Pré. We wanted to embrace all the incredible history this institution (The Evangeline café ) and the area (Grand-Pré) have.

GV: What are the plans for the future?
AS: As mentioned, we are currently open for breakfast and lunch, but will be introducing dinner in two to three weeks. We are super eager to open for dinner, where award-winning chef Ray Bear has put together a very exciting menu: oysters, grilled whole fish, and lobster spaghetti are just some of the dishes we look forward to serving. We have also built a takeout window because we know folks in the area appreciate the ability to pick something fresh and delicious up quickly.

You can visit Longfellow at 11668 Nova Scotia Trunk 1, Grand-Pré, Wednesday to Sunday, 8am-2pm. 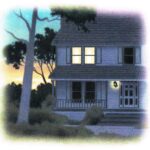