Skip to the content
Articles Events
Grapevine Publishing
March 9, 2017
The Women of Wolfville Are Ready To Laugh At Themselves
By Wendy Elliott
The Women of Wolfville (WOW) network of over 300 women from across the Annapolis Valley know that ‘She Who Laughs Lasts’. Forty cast members, ranging in age from 6 to 65, have been preparing for several months for this new production. This year’s presentation looks at a community through the lens of humour. Staged at the Al Whittle Theatre in Wolfville for the first time, there will be three performances on March 24 and 25. The collective creation will be full of storytelling, song, and dance. The production takes an original look at finding and celebrating the humour in a small town. The evening performances are at 7:30pm and the Saturday matinee is set for 2pm. Proceeds from this year’s production will help several charities and commemorate Wolfville’s unsung WWII heroine Mona Parsons. Through their annual theatrical adventures, WOW has raised over $187,000 for charity since 2001. Tickets for this year’s production are $12 for students/seniors and $15 for adults. They are available at the Box of Delights Bookstore in Wolfville or at the door. 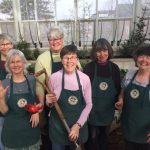