0
Quick As A Wink Theatre does The Music Man!
By Mike Butler
Following a very successful run of the musical Grease in early 2017, Quick As A Wink Theatre Society (QAAW) in Windsor is ready to tackle its next big Broadway musical. This time The Music Man is making its way to the local theatre stage.
This classic musical, first produced on Broadway in 1957, won five Tony awards, including Best Musical, and ran for 1,375 performances entertaining audiences of all ages. The show’s success led to revivals, including a long-running 2000 Broadway revival, a popular Academy-Award winning 1962 film adaptation starring Robert Preston (who also played Harold Hill on Broadway), and a 2003 television adaptation starring Matthew Broderick. The Music Man is frequently produced by both professional and amateur theater companies, and with Quick As A Wink Theatre Society, and Director Thea Burton at the helm, this production is sure to be a must-see hit!
The plot concerns con man Harold Hill, who poses as a kids’ band organizer and leader, and who sells band instruments and uniforms to the naive Iowa townsfolk, promising to train the members of the new band. But Harold is no musician and plans to skip town without giving any music lessons. Prim librarian and piano teacher Marian sees through him, but when Harold helps her younger brother overcome his social awkwardness, Marian begins to fall in love. Harold risks being caught to win her, making this play a fun, quirky, warm, touching, toe-tapping, and 76-trombone-blasting burst of entertainment!
Under the direction of Thea Burton, no stranger to acting or directing local theatre productions, The Music Man is going to be something she’ll be very proud to present. Thea has worked on many local high school productions, and she was the director for QAAW’s hugely successful production of Annie in 2016. She also performed in QAAW’s Into The Woods last fall, played Mrs. Bennet in The Theatre Arts Guild production of Pride & Prejudice at the Pond Playhouse in Halifax this spring, and played Rachel Lynde in The Stage Prophets’ Anne & Gilbert here in Wolfville last week!
Musical direction for The Music Man is by the very talented Michael Nelson, who has worked with many high school productions, for The Stage Prophets, and most recently was the music director for Grease. The Music Man features over 40 local performers, so you’re bound to see some very familiar faces including Donna Holmes, Alan Slipp, Ray Baltzer, and Grease cast members Justin Brown as Harold Hill, and Becca Guilderson as Marian.
Shows will take place in the Fountain Performing Arts Centre at King’s-Edgehill School in Windsor during the first two weekends in June including 7pm shows on June 2, 3, 9, and 10, and matinees on June 3, 4, and 10 at 2pm. Tickets can be purchased online at QAAW.ca or by visiting The Box of Delights Book Shop in Wolfville.
Quick As A Wink Theatre Society is a non-profit, charitable, community theatre group entertaining West Hants, Nova Scotia, and beyond. QAAW’s objectives and performances are conducted and achieved entirely by volunteers and non-profit means. Make sure you get your tickets early folks, because if The Music Man is anything like Grease, seats will fill up fast and you don’t want to be disappointed by missing this show. It’s perfect entertainment for all ages, and it’s a wonderful way to introduce new people to local community theatre if they’ve never seen a Quick As A Wink Show! See you there! 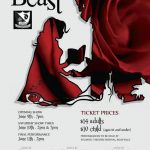