Kingtec Tribute to MMIWG
The Kingstec L’nuek Alliance (formerly known as the Kingstec Indigenization Alliance) is hosting the second annual Tribute to Missing and Murdered Indigenous Women and Girls (MMIWG) on Tuesday, March 26, from 11:30am to 2:30pm. Guest speakers will include Elder Peggy Wentzell, leading the smudge ceremony and singing the Healing Song; former RCMP Rod Francis, who will speak about his experience working on the human trafficking unit and how it connects to MMIWG; and Carolyn Landry, a local cultural educator. Rachel Whitney, BSc, BEd, will also speak on the role of education in addressing issues related to MMIWG. The Melgita’t Women (Indigenous women’s drumming and singing group) will share songs, and a few traditional dancers will be at the event. “We will also have the grand unveiling of a 4ft tall steel red dress that students in the Heavy Duty Equipment / Truck & Transport Repair program created,” says Whitney. The event will also showcase informational and art displays created by members of the L’nuek Alliance and students in the ALP Mi’kmaw Studies course.

Project Regenerate
Focused on providing Valley youth (age 6 to 18) with a foundational knowledge of environmental sustainability and entrepreneurship, Project Regenerate was formed in 2017 by Enactus Acadia, a social entrepreneurship group at Acadia University. Participants have been building their entrepreneurial confidence through a series of workshops on subjects like accounting, prototyping, ideation, marketing, and sales. “To integrate the environmental sustainability component of the program, we produced, priced, marketed, and sold Christmas ornaments made out of crayons that would have otherwise been thrown out after just one use,” says project manager Emily MacLennan. Now, each participant has started their own business. They will be selling their products at ScratchFest, a computer science build-a-thon for youth on Saturday, April 6 at the Fountain Commons building on the Acadia University campus. MacLennan says some of the businesses include cake-pops, chocolate, bath bombs, model cars, marshmallows, and bracelets. “To finance their ventures, Project Regenerate has partnered with a local entrepreneur named Solomon Caplan and his microloan business, Kinderprise,” she explains. “Kinderprise is a youth microloan business aimed to cultivate young business leaders in the Annapolis Valley.”

Chicago: The Musical
The West Kings Drama Club is presenting Chicago The Musical in the “Fosse” style at the school theatre on April 3, 4, 5, 6 at 7pm & April 7 @ 2pm. Billed as “a musical vaudeville,” Chicago tells the story of Roxie Hart (Cassie McCall) who finds herself on prison matron, Mama Morton’s (Lilly Gould) Murderer’s Row in the Cook County Jail after shooting her lover. She sends her naive husband Amos (Patrick Estey) to see smooth-talking attorney Billy Flynn (Noah Bradbury), who agrees to take on her case and manipulates the Chicago press to make Roxie a celebrity. Roxie has a rival for the media’s attention, however: another Billy Flynn celebrity client named Velma Kelly (Sophie McMillan). Choreographer Netanya Backhouse (grade 12) has created over 15 original dances for the cast of grade 9-12 students, all supported by musical director Richard Bennet and his 11-piece orchestra. Artistic and show director Hal Jessome is returning for his 8th show at West Kings. For Ticket information, contact 902 389 8885 or westkingstickets@gmail.com.

McKinley Morrison & Williams Hit Wolfville
New Brunswick’s cutting edge Jazz Fusion trio, McKinley Morrison & Williams are hitting the road in April for a string of Maritime performances! They will hit the Acadia Cinema’s Al Whittle Theatre on Saturday, April 6 with a show at 7pm. “We are very excited to come to Wolfville for the third stop on our tour!” says Josh McKinley. “Prepare for 2 sets of music, bass solos, guitar wizardry, and a borderline drum clinic performance!” 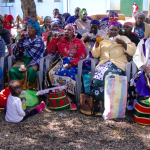 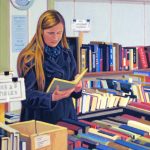