The FunTime Brigade & The Roommates

The Grapevine > Articles > The FunTime Brigade & The Roommates 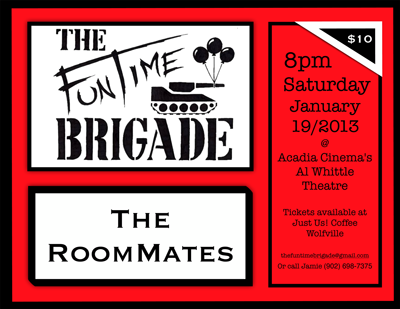 “Orange juice and pyjamas. Orange Juice. And Pyjamas.” That can only be the obscure sound check of the seemingly nonsensical FunTime Brigade. But is it nonsense? You’ll have to ask them to find out…
And you’ll get your chance soon at the Al Whittle Theatre in Wolfville on Saturday, January 19th. Starting at 8pm, the show will open with a smashing set from the latest up and coming talent, The RoomMates. With four part female harmonies and a natural feel for how to captivate an audience, you’ll get your money’s worth before you even make it to intermission. But if you stick around, you’ll get to hear all the latest tunes from the only known hiprock folkrap group, The FunTime Brigade. With a little something for everyone, this group delivers an upbeat, family friendly show while performing only original tunes and local covers (as dictated by the second FunTime Brigade Commandment).
You can get your tickets for $10 at Just Us! Coffee in Wolfville, or from any of the band members. Make time for a good time with the FunTime Brigade.