The Grapevine > Meet > Who's Who > Johanne McInnis: Hitting ALL the Right Notes! 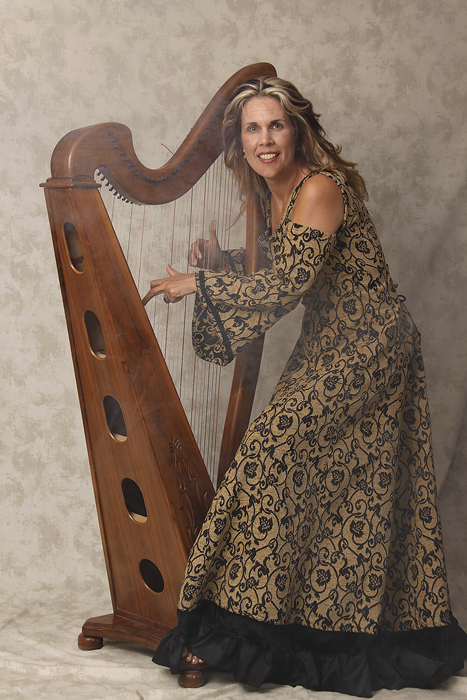 How do you sum up a person and their amazing talents in a small article like this? This is the question I ask myself every time I sit down to write a profile. The answer is, I can’t! All I can do is pique some interest in, paint half a picture of, and offer a small taste of the people I write about. Johanne McInnis is a very talented musician and promoter of the arts. Let’s see if I hit the right notes with her profile.

Johanne J. McInnis was born and raised in Quebec, 10 minutes from the Old Quebec where the arts are at their best with the likes of Cirque du Soleil and an infinite number of musicians roam the streets. Johanne studied music in Quebec and studied further in Ontario and Europe, but she has called Nova Scotia home for nine years now. She loves being surrounded by the warm souls she has found here.

When I first met Johanne, it was evident within minutes that she was a woman passionate about the arts in all forms. She has practiced music, drama and creative dance for the past 25 years and is thrilled to share her passion with the Annapolis Valley population. She says, “I see so many young people that have the potential of having a wonderful career as acrobats in the Cirque du Soleil, and would love to see one of those artistic/acrobatic schools in the Valley someday. It would allow our kinesthetic students to pursue their talents and dreams in creative ways.”

I have always wondered, not being a musician, how a person discovers their talent. Johanne immediately fell in love with the history, the evolution and the sounds of the instruments and was quick to transfer that knowledge and love into sounds and music. Johanne says, “ Playing harp music has brought me to places/regions/parts of the world I never imagined I would visit someday. Also, I often am called to play harp at the bedside of fellow human beings transitioning from caterpillar to butterfly.  I recently lost a precious friend, in the Valley, and I was touched to be called by the family to go and soothe the soul of their beloved by playing harp by her bedside. These experiences are in my memory for a lifetime.”

I said that Johanne is a musician, but this is an understatement. She is a wonderful Celtic, classical and jazz harpist. Her unique style and approach to the music she plays, which incorporates nature and the visual arts, is a revelation. She is a musician during the summer months, performing for special holidays, corporate parties, VIP events, and private concerts, and she is a teacher of music throughout the year. Her career has taken her all over Canada and Europe, but she says being the main harpist at the Le Chateau Frontenac castle in Quebec was one of the strong highlights of her career. Two years ago, Johanne was able to travel through Greece for almost three weeks and she attended a world-music conference where music educators from 66 different countries were represented. She says it was incredibly rewarding. For all upcoming performances, videos, biography and more, visit Johanne’s website at www.johannemcinnis.ca.

And besides playing for private venues, she is currently rehearsing with a new team of musicians in Halifax, bass and percussion, and planning to start presenting the Environmental Eclectic Show called Nature Speaks…Beyond Appearances. This is a very exciting venture and I can’t wait to see how it unfolds.

Johanne’s future goals include experimenting with playing the harp on a cruise boat all over the world for her next sabbatical. She plans to do more touring with the show Nature Speaks…Beyond Appearances and continue to bring awareness about nature and our involvement in it. Take the time to explore this very talented musician and her efforts. It will be music to your ears.