There is a teenage girl who waits at my kids’ bus stop in the morning. She’s sweet and friendly, and always a little under-dressed for the weather. The other morning she was shivering and rubbing her hands as she smiled and chatted. On impulse, I asked her if she would like my gloves, taking them off and holding them out to her.  She only hesitated a second before nodding yes and putting them on. She then rewarded me with a huge smile and a bear hug.  I don’t know this girl very well, and I’ve never met her family, but I get the impression that they don’t have extras. I didn’t give it a second thought when I put my gloves on that morning, but in that moment they became extra, and I was happy to pass them on.  Now I’m on the hunt for a winter coat to give to her as well.

The first snowfall of the winter happened while I was at work. Being a new driver with summer tires still on my vehicle, I was extremely thankful to have a text from my in-laws offering me a safe way home. When turning from Gaspereau Ave. onto Pleasant St. (Wolfville), my mother-in-law became stuck, spinning her tires in the slush at the bottom of the hill. A man from the sidewalk was there within seconds offering to give her a push. At first she tried to decline politely, but he insisted, “It’s no problem! I’ve already pushed 5 cars up!” It appeared that this kind man was just waiting at the bottom of the hill to help those who needed it. 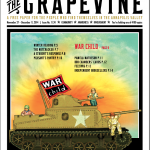