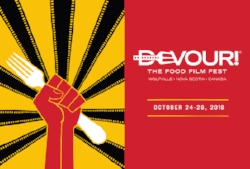 The world’s largest culinary film festival, Devour! The Food Film Fest (Devour!) will present 74 food-and beverage-focused films from 21 countries, running the gamut from eye-opening feature length documentaries to quirky and engaging short flicks. Devour’s 2018 programming centres around this year’s overall theme of “The Power of Food and Film to Transform.”

“Film is a powerful medium that can help shine a spotlight on important issues, spark conversations, inspire others and promote meaningful change,” said Devour! Managing Director Lia Rinaldo. “We are experiencing a cultural shift where many of us are rejecting the status quo and looking to transform our lives. As a result, the culinary industry, among others, is going through this period of upheaval and transition, which we strived to reflect in this year’s slate of inspiring and impactful films that explore topics from food waste, sustainability, food security, environmental impact, gender equality, discrimination, and politics, to name a few.”

The 2018 lineup includes 28 thought-provoking feature films including eOne’s Jiro Dreams of Sushi about 85-year-old sushi chef Jiro Ono, the proprietor of a three-star Michelin sushi restaurant inauspiciously located in a Tokyo subway station. The film will open the festival on Wednesday, October 24 and was personally selected by 2018 Festival Guest Curator Sam Kass, the former White House Chef for the Obama family and a healthy food activist. Each year, the festival’s opening guest presents their favourite food film of all time; the only retro title in the program.

Film highlights include the Thursday night gala film André – The Voice of Wine about André Tchelistchef, the godfather of California winemaking, directed by his nephew Mark Tchelistchef who will be in attendance; the Canadian premiere of returning filmmaker Gab Taraboulsy’s feature length biopic Funke, chronicling Chef Evan Funke as he sets up one of the hottest restaurants in Los Angeles, Felix Trattoria; the world premiere of the Canadian documentary Six Primrose, which chronicles the dramatic impact of accessing healthy food on the community of Dartmouth, NS; and the inspiring documentary Charged: The Eduardo Garcia Story, chronicling Chef Eduardo’s recovery following a freak accident. Chef Eduardo Garcia is attending the Festival as a featured chef and will participate in the Celebrity Chef Dinner on Friday, October 26, alongside other top chefs still to be announced.

Devour! will screen several films that document the success of women and the challenges they face in the male-dominated culinary industry. A Fine Line, directed by Joanna James, explores why only six per cent of head chefs and restaurant owners are women and documents the rise of some of the most celebrated women in the industry including the World’s Best Female Chef and Devour! alumna Dominique Crenn, and Emmy Award-winning TV Host Lidia Bastianich. Canadian Director Maya Gallus’ The Heat: A Kitchen (R)evolution profiles seven female chefs facing daunting professional obstacles, harassment, and toxic environments. Thirty-six per cent of this year’s film program is directed by women.

The Festival will close with a feature drama from prominent Nova Scotia director Thom Fitzgerald. Splinters is an intimate drama about sexual identity, family and life in small-town Nova Scotia, filmed on an apple farm in the Annapolis Valley, mere minutes from the film fest’s location. “We’re thrilled to finally present a feature drama filmed right here at home that marries well with the festival’s niche, and by a venerated director and our friend, Thom Fitzgerald, no less,” says Managing Director Lia Rinaldo. This year’s program marks the festival’s largest program of Canadian content on screen at 32 percent of the films, including 17 per cent from Atlantic Canada.

Devour! will showcase 45 short films, including David Ma’s Hollywood-inspired recipe video series filmed in the aesthetic style of famous filmmakers: What if Alfonso Cuaron Made Pancakes?, What if Michael Bay Made Waffles?, What If Quentin Tarantino Made Spaghetti & Meatballs? and What If Wes Anderson Made S’mores?. Additional programming includes six visually stunning films about Nova Scotia from the award-winning team behind the The Perennial Plate, and selections from returning filmmaker Kevin Kossowan’s James Beard Award Nominated Canadian series, From the Wild: Bay of Fundy and From the Wild: Devour! Edition.

A highlight of the festival program is the return of the Devour Road Show Celebrity Chef Dinner on Saturday, October 27, where a special program of five short films will be screened right in the barrel cellar of Lightfoot & Wolfville Winery, with chefs pulling their inspiration for their dishes right from the films.

For more information on the Festival programming, please visit devourfest.com. 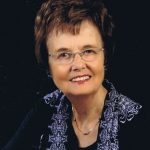 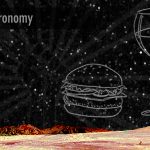