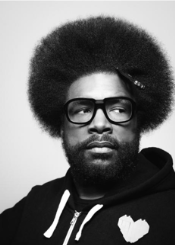 As a drummer, DJ, producer, and five-time GRAMMY Award-winning musician, Questlove’s name is synonymous with music, but the artist and activist is also an influential figure in the culinary world. He first arrived on the food scene with his signature “Love’s Drumstick,” Creole-seasoned, buttermilk-fried chicken drumsticks. He appeared as a guest judge on Top Chef Season 11, and currently hosts a series of Food Salons with world-renowned and innovative chefs at his apartment in the NY by Gehry building in New York’s financial district. His book, Something to Food About, explores creativity in cooking with ten of America’s most innovative chefs. His culinary endeavours have been featured on the cover of New York Magazine, in Food & Wine Magazine, Bon Appetit, and seen on The View, Watch What Happens Live, and Late Night with Jimmy Fallon.

Questlove is equally passionate about food politics, a natural fit for the 2018 festival theme: “The Power of Food and Film to Transform.” He is a celebrity ambassador for Food Bank For New York City, is on the City Harvest Food Council, a board member of Edible Schoolyard, and the first artist-in-residence at the Made in NY Media Center. Questlove is also a founding member of the CAPA Foundation in Philadelphia.

A Conversation about Food with Questlove & Book Signing takes place Saturday, October 27 at 3pm at the Al Whittle Theatre, 450 Main Street. Tickets are on sale now for $25 at devourfest.com. 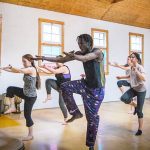