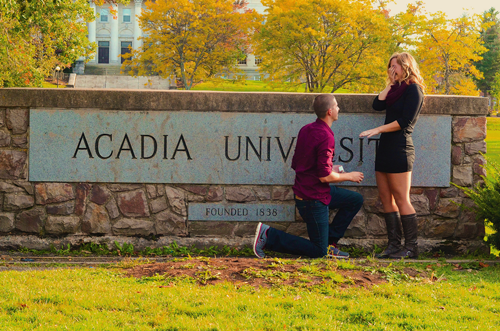 My boyfriend and I met three years ago at Acadia. He was in third year, I was in first and although we’re from the same hometown we went to different high schools and didn’t know each other. I know a lot of people say it’s not possible to find love here, but it is, trust me.

As an Acadia grad, he planned to make a trip up for Homecoming to reunite with fellow alumni he hadn’t seen since graduating two years ago – as that is what the weekend is all about. Friday night we attended the hockey game, had a beer, and watched the Stanfields play a great show. On Saturday, like many people I woke up at 8am, but it was not to crack open a cold one, and start flipping pancakes, instead I went for a run. That afternoon I didn’t paint myself in red and blue, get so intoxicated I disrespected those around me, or put myself in danger.  What I did was dress up and take pictures with my boyfriend because I’m graduating in the spring and we wanted fall photos in the Valley.

As two Acadia students, former and current, we went to take pictures by the Acadia sign because in the three years we’ve been together we still hadn’t taken a picture in front of the “famous” landmark. I will forever remember that sign because, in front of it and a bunch of strangers, my boyfriend got down on one knee and proposed!

My homecoming was amazing. It was not defined by my level of intoxication, by parties, or by #hoco expectations. It was defined by the love I found at Acadia, a moment I will remember for the rest of my life, and alumni pride.  I will always proudly wear the “A” in respect of this beautiful town because it has given me experiences I will never forget. I encourage everyone to share their happiest memories at Acadia because this institution and its students should not be defined by recent allegations.

That girl who got engaged on Homecoming 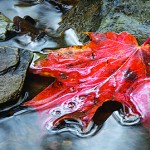