0
Return to the Garden Room
By Thomas Clahane
The first weekend of fall also brought with it the first concert of the season in the Sunday Garden Room series. One of the hallmarks of the Garden Room concerts in the past has been the diversity of classical genres that are presented, and this opening concert featured Art Song. It proved a perfect platform to feature the strong tenor voice of former Acadia music student Marcel d’Entrement and pianist Dakota Scott-Digout. Art Song is a short piece for solo voice, based on a literary text, supported by classical composition, and performed by a trained singer. This sets it apart from what we consider “folk” or “pop” songs. It is usually accompanied by the piano and is considered a genre of Romantic music.
Marcel introduced the first series of songs by explaining that they were based on the folk tales of the Lorelei – a young, beautiful woman with long blonde hair, who appeared naked in the water to sailors, and lured them to their deaths on the rocks. The four songs presented, varied greatly in their approach. The first, by Robert Schumann, and third, composed by his wife, Clara, were urgent, powerful, and aggressive with Dakota almost attacking the piano accompaniment. In contrast the second, by Silcher, was lyrical and seductive, and the final piece by Liszt was almost a lament. Marcel introduced the second set of pieces by Ravel, explaining that while they were considered a cycle, the themes were not really related, and that while they were “Five Popular Greek Melodies” they were actually composed in French. The final set of the opening half was three pieces by Schubert, and again Marcel introduced the Greek myths that provided the texts. By doing so, he provided a canvas for the audience’s imagination – from Ganymede who was spirited to Heaven by Zeus, appearing as a nightingale, to Der Zwerg the, perhaps, suicidal dwarf who kidnaps the princess who doesn’t return his love, takes her to sea to drown her, and never returns. When the listener doesn’t understand the language of the song, it offers the opportunity to experience the emotional impact of the Art Song in a totally unique way, especially when the seed of the story is sown as a preface, as Marcel did so well.
The second half of the performance featured pieces based on English texts, including pieces from Nova Scotia and Newfoundland. Listening to the pieces, and understanding the text, presented a very different experience when contrasted with the earlier pieces. We were fortunate to have a special guest appearance by Donna Rhodenizer, the gifted Nova Scotian composer of two of the pieces performed – “The Call of the Ocean” ( I heard ghosts of John McCormack in this) and “The Love of the Sea.” Donna accompanied Marcel with Dakota on these, first on accordion and then on violin (or fiddle, depending on your point of view)! The audience was completely engaged and showed their appreciation enthusiastically. The set closed with four pieces by Aaron Copeland, and Marcel showed a little of his comic side, closing with “I Bought Me a Cat” which might be described as the Art Song version of “Old MacDonald Had a Farm.”
The standing ovation drew an encore, the anthemic Nova Scotian folk song, “We Rise Again.” It was yet again another powerful demonstration of this unique approach to composition and performance, and a fine beginning to what promises to be another strong season of performances in the Garden Room. Welcome back. 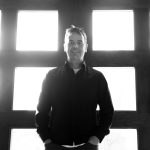