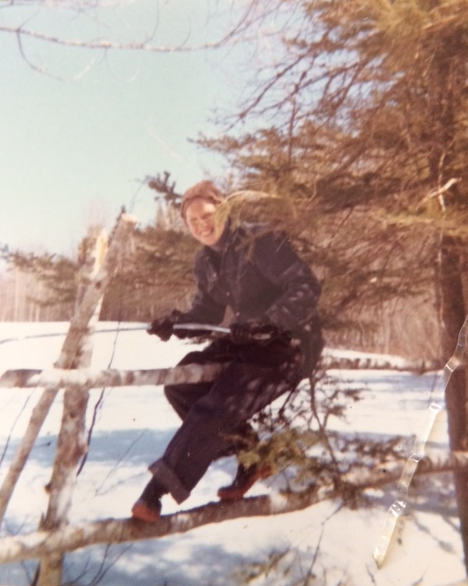 Articles Dome Chronicles Read
Grapevine Publishing
March 23, 2017March 22, 2017
The Dome Chronicles: A Wet Spring
By Garry Leeson
In 1972, a boxcar from Toronto containing a menagerie of farm animals and an eager young couple pulled into the station platform in Kingston, Nova Scotia. They were bound for a deserted hundred-acre farm on the South Mountain, determined to preserve the foundations of farmsteads past while constructing a geodesic dome. They were pioneers of the future, armed with respect for tradition and an irrepressible sense of humour. They didn’t call themselves farmers. They were back-to-the-landers. Farming was industry and their calling was sustainability. Over the next forty years, through flood and fire, triumph and catastrophe, they persevered, unwittingly sowing the seeds for the modern small-farm movement.
They warned us, “If you don’t like the weather in the Maritimes just wait an hour or so”. We thought they were kidding but a week or so after our arrival at our new home the seriousness of the warning became painfully apparent. March of 1972 came in like a lamb and was showing signs that it would fulfill the folk wisdom that suggested that it would go out like a lion. The days were warm and the snow had retreated into the woods that surrounded the ten-acre field where we had pitched our tent and established our camp. It had been so warm that I had been working bare-chested tackling the preparations for a permanent build.
We had come down several weeks before our big move to get things ready for the horses. The field wasn’t fenced, so I wouldn’t be able to turn our three horses and pony loose. Together Andrea and I erected a canvas-topped temporary stable for them but it would be far too small for them after the five-day trip crowded together in the boxcar. We wouldn’t be fencing until much later on so I decided that a good-sized temporary corral would take care of their immediate needs.
I picked out a spot on the edge of the woods, handy to the field, where I could fell a bunch of poles to serve as rails then avoid using posts by simply attaching them to trees. The spot seemed ideal and in a couple of days with the axe and the swede saw, Andrea and I had a sturdy enclosure ready for use. When we arrived a few weeks later we felt pretty pleased with ourselves. There’s a certain satisfaction in the knowledge of a job well done. The site selection had been clever and the use of suitable terrain and available timber had been truly inspired.
On our initial visit we had become accustomed to, and comfortable in, our tent home but had spent a couple of nights at the Kingswood Inn in Kingston. On our first night after the train ride we decided to treat ourselves to a night away, a good meal, a warm bath, and a comfortable bed. Old Bill Pope had always been a welcoming host. He even offered to take our two dogs, Bussy and Boo, out for an early morning walk while we slept in before we lingered over one of his amazing breakfasts.
After watching the horses lounging around their new home and digging into the hay we had spread for them, I took several pails of water over to them to last them through the night. There was still lots of snow on the ground but the area around the horses was dry and I knew that they would need a lot to drink. We made sure the chickens, ducks, and cats were safely housed and confident in all the animals’ safety and comfort, we headed into town and the Kingswood.
We had a good visit with Bill that night but in the morning he apologized for not walking the dogs. A torrential rain had started around midnight and had only recently stopped. We finished a leisurely breakfast, accepted the scraps Bill had ready for the dogs and then headed for home. The road that led up to our field was a little muddier than usual so we left Andrea’s Austin Mini station wagon near the main road and walked in the half mile.
When we arrived at our camp I was anxious to have another look at my pride and joy – the new corral. I heard it before I saw it. I couldn’t believe my eyes! A full powered stream of water was roaring through the enclosure and the horses were standing submerged up to their bellies. They looked like feeding moose as they snatched wisps of hay drifting by them. I almost drifted away myself heading in to rescue them. I guess it was the deep snow in the area that didn’t clue me into the fact that we had constructed the enclosure smack dab in the centre of a watercourse. The spring downpour had activated a brook that flows freely through most of the year. It now feeds the huge acre-sized pond behind our house, a few feet from where the remnants of the old corral still stand. 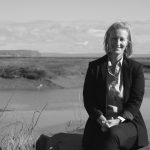