The neon ACADIA marquee on the Acadia Cinema building, a key landmark on Wolfville’s Main Street, is now protected as a provincially-registered heritage property. The Co-op received notification in January that the property has been registered under the Provincial Heritage Property program of the Department of Communities, Culture, and Heritage.

The Acadia Cinema Co-operative, the non-profit operators of the Al Whittle Theatre in the Acadia Cinema building, applied to have the theatre’s century-old significance as a cultural venue recognized both provincially and municipally. Inclusion in the provincial program offers conservation advice and can provide cost-sharing to maintain the building exterior.

The theatre’s renovation has been supported from the beginning by community members who bought shares to ensure the theatre remained open and was re-developed into a multi-use performance space. “The Acadia Cinema Co-op has been financially supported by over 730 shareholders from Nova Scotia and beyond”, noted Acadia Cinema Co-op treasurer Paul Callaghan. “The commitment of these shareholders speaks to their appreciation of all the presenters who rent the theatre to make such a wide variety of cultural events available to our community.”

The Acadia Cinema building was purchased in 2004 by The Acadia Cinema Co-op and by Just Us Coffee Roasters who run a coffeehouse in the theatre lobby. The former movie theatre was managed by A. (Al) Ellsworth Whittle from 1953 until its closing in 2000 when he retired. Owing to his long service at the theatre and his connection to generations of Acadia students and local residents, the new owners named the theatre after Mr. Whittle. 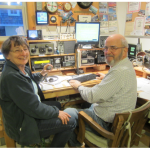